My featured moan today is from Miss Me Baby. Felicity really wanted her story told and well, I couldn't say no. Here's the moan! 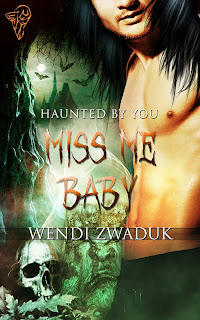 Say you’ll haunt me, since I’ll never stop loving you.

And here's the moan!!

She smoothed both hands up his chest and leant back in his arms. Felicity arched back over his forearms, giving him a delicious view of her breasts. She grabbed his shirt and slid up his body. “You should be naked. I want you.”

Hell, yeah. John untangled himself from her and ripped his shirt up over his head. He snorted. Getting naked in a dream always went so much smoother than in real life. He tossed the shirt out of sight and scooped her back into his arms.

Um... Their relationship sounds complicated. ;)
Lived the sexy excerpt! Is this one currently available?

This one is available for preorder on Total-E-Bound's site. Releases to the general public and on Amazon later this month. And yep, they have a complicated relationship. :-)