This week's snog is from one of my favorite stories, The Phantom of the Opera! I love this story and want to share this snog with you. 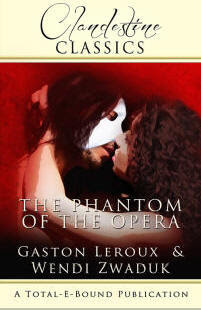 A chance sighting at the Opera, fated love, and three lives in turmoil.

One man pledges to own her, while another wants her heart. The Opera sets the stage for romance and intrigue. In the catacombs below the building lives a man rife with sorrow and passion. The Phantom. But he’s not content to live alone. He wants to possess the one woman who can set him free.

Viscount Raoul de Chagny doesn’t believe the rumours of a Ghost living below the Opera. He only has eyes for Christine, his childhood friend and first love. Together they embark on a sensual journey of discovery and fiery desire.

But she can only have one man. Will love raise her up or tear their world apart?


“But…but,” she continued, holding out her two hands to Raoul, or rather giving them to him, as though she had suddenly resolved to make him a present of them, “but if we cannot be married, we can…we can be engaged! Nobody will know but ourselves, Raoul. There have been plenty of secret marriages, why not a secret engagement? We are engaged, dear, for a month! In a month, you will go away, and I can be happy at the thought of that month all my life long!”

She was enchanted with her inspiration. Then she became serious again.

“This,” she said, “is a happiness that will harm no one.”

Raoul jumped at the idea. He bowed to Christine and said, “Mademoiselle, I have the honour to ask for your hand.”

“Why, you have both of them already, my dear betrothed! Oh, Raoul, how happy we shall be! We must play at being engaged all day long.” She pushed him down onto the chair and straddled his lap. “All day.”

He felt the heat in her sex straight through his trousers. “I want to make love to you, my betrothed.”

“And you shall. Just like before, but without the sting of the first time.” She guided his hand beneath her skirts until he touched the soft folds of her cleft. Christine leaned into him and captured his mouth with hers. Her tongue slid over the seam of his lips. A groan began deep in his throat. He was expecting to never have such moments with her again. He inserted his finger into her wet heat.

Christine broke the kiss and whimpered. “Feels very good.” She placed his hand on her breast. “More.”

Damn! *hand fanning face* Yeah, okay, I think that about says it all :)