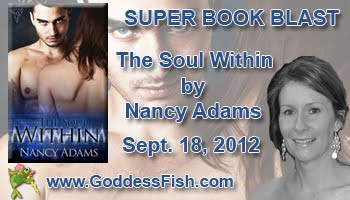 Nancy Adams' newest release, The Soul Within is stopping right here for her tour. And you can take part! How? Comment! Nancy will be giving away a $20 Total-e-Boundor Amazon gift card to one random commenter during the tour. Click here or the banner to follow the rest of her tour!. Now on with the post!

The Soul Within by Nancy Adams

Alex’s body is in a coma. His soul, however, is not. Desperate to become whole, he must first convince stubborn beauty Evening Sinclair that he is not dead.

For generations, the Sinclairs have been healers. Using a gentle touch to heal the body and a soothing word to heal the soul, Evening Sinclair is no different. Yet despite her secret abilities, Eve has a somewhat normal existence. She enjoys her small physiotherapy practice, dotes on her eight-year-old daughter and occasionally helps souls get back into their bodies-that is until Alex, with his brooding good looks and glowing eyes, appears in her kitchen.

Alex is desperate to get back into his body-two innocent lives depend on it. His only obstacle is Eve and her stubborn fear. Unfortunately for Eve, Alex is ruthless and just as stubborn. He will do whatever it takes to get what he wants. He will not 'go away' and no matter how much Eve tortures him with her lush body and perfect mouth, he will not change his mind. Eve will merge him, and if it takes him haunting her day and night, she will merge him back with a body-any body.

And an excerpt for your reading pleasure!

“Go. Please,” she implored again. The look on her face caused him to frown. Not because she had recited those words, yet again, to him but because he was actually considering giving her what she wanted and leaving her alone. He wished he could give her that, but he wouldn’t. Besides, he didn’t like it when people lied to him and she was lying. She was capable of putting him back into his body—he read it on her face, in the movement of her hands and body.

The Guardian Project had spent long hours and millions of dollars teaching their soldiers how to read and interrupt body language. After all, if the people he hunted were on his kill list, they’d been good enough to avoid traditional police and military forces and he had to be better in order to stop them.

Deep in his gut he knew there was more—she wasn’t telling him the whole truth. Shit she wasn’t really telling him anything. It didn’t matter—he would not walk away just because Eve was scared. He would not let Miles kill Jillian. She and her baby would live.

She closed her eyes and drew a deep breath. “I won’t help you.”

“Yes you will.” He took a step closer to her. “And I’m going to haunt you until you give me what I want.”

“Haunt me.” Her eyes grew wide as a shiver shook her from head to toe.

“Mmm.” He winked. “I’m not leaving your side until you put me back in my body.”

“No,” she whispered, her eyebrows pressed together. “I won’t help you.”

And now a little more about Nancy. Here's here bio and links:

Nancy’s addiction for a good trash novel began in her late-teens when her grandmother gave her a bag of Harlequin Romance books. She was hooked and spent the next few years lurking in the dark corners of used bookstores searching for her next fix. Until, one marriage and two kids later, her own ideas had her jumping up at 3 am (much to her husband’s annoyance) and typing them into her laptop. Beside her husband and children, Nancy has three passions, rearranging furniture, buying bed linens and, of course, writing. Nancy lives in Eastern Ontario with her family and two over sized lap dogs.

Thank you for hosting Nancy today

I only wish your excerpt was longer. I want to know what happens next.

Thank you for having me today, Wendy.
I hope your followers enjoy a good spine tingler!