I've got lots going on today. Not only am I visiting a couple places, but it's release day. Talk about a great day!

Manic Minute Monday over at Maria-Claire Payne's site. I've got a great picture of Greek art that will certainly turn up the heat! Check it out!

I'm also hanging out with my good friend Virg Nelson. Yup. Found another saucy picture of Greek sculpture for the post. You'll want to check it out! 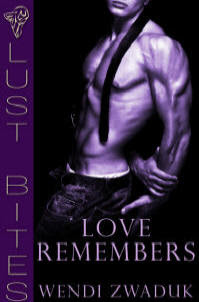 If he wants to keep Aspasia once he finds her, Gregorius will need to prove that his Love Remembers.

A veteran of the war in Koroneia, Gregorius wants only one woman for his bed. She made his heart sing the moment he first saw her in the markets, and for the past seven years he’s hunted far and wide for her. Once he finds her, he’ll prove his love never forgot her.

Aspasia isn’t the mirthful girl from the markets any longer. Circumstances beyond her control forced her into service to Gregorius’ bitterest enemy. When she at last finds herself in Gregorius’ arms, can she let go of the past in order to have the future she deserves? Only if love remembers...

Reader Advisory: This book contains a hero bent on finding his first love and a heroine determined to let him have his wicked way...in the garden, on the benches, in the olive grove...

Here's a taste of Love Remembers!

"I will have you chained to my bed for the rest of your days!"

Revulsion and disgust surged through her veins. Aspasia bit back the nasty response on her tongue. No need to provoke her master.

A shout resonated from another chamber in the sprawling home.

"I will be back for you in a moment." The master gestured to the guard with the flip of his hand. "You may play with her until I return."

Aspasia locked gazes with her guard, Atticus. He folded his thick, muscle-corded arms. His expression remained blank. When the master’s footsteps no longer echoed on the stone floor, Atticus moved into action and wrapped his meaty fingers around her arm. "Get into the hallway."

Frightened by his brusque tone, Aspasia complied. She gathered her torn chiton and covered her nudity. Never one to act against wishes, she prayed to whichever God listened to make the sexual encounter quick and painless. Being with Visius humiliated her to her core, but, as a slave, her complicity was demanded or she risked the whip…again.

"Come on. Before he returns." Atticus’ gruff voice sent chills down her spine. "He deserves the wrath of Zeus for his actions."

Her heart hammered within her chest. Atticus rarely spoke. Could he be acting against orders? Ice slid through her veins. Did he want her as his own slave? She bit back a sob. Too many times the people she trusted used her kindness as leverage to gain favour with Visius. Though not conventionally handsome—with hooded eyes, a square jaw, and a body honed for battle—she liked Atticus. Had they met outside Visius’ gate, she might have loved him.

At the end of the corridor, Atticus opened a small wooden door. Moonlight streamed across the tiled floor. "Go."

For the first time in months, she found her voice. "Where? I have nowhere to go."

A sparkle twinkled in his dark eyes for a moment. The corner of his mouth kinked into a faint smile. "Head west until you see a creek. Do not stop. Just run. You will be safe."

Knowing she had no alternative, she kissed his massive hand then surged through the doorway. The cool night air prickled her skin, but she refused to stop. At the entry gates, she pushed any thoughts of her captor and his strict rules from her mind. Gravel crunched under her bare feet, but she ignored the pain. Freedom numbed the pricks and stabs from the sharp rocks.
Posted by Wendi Zwaduk and Megan Slayer at 2:00 AM