Natasha Blackthorne Stops by With White Lace and Promises

New York Merchant Prince Grey Sexton loves the audacious, spirited young temptress who seduced him in a Philadelphia bookseller’s and made passionate love to him in his carriage. Her fiery nature broke through his cold self-protection. But in a time of war and trade disruption, he cannot allow himself to be distracted. He vows to put business above all else in his life, including his bride.

Shocked and hurt by Grey's distance, Beth wonders whether he truly returns the burning love she feels for him. Beth demands that Grey prove he can truly change once and for all or else she will not start a family with him. But will the dark, sensual secrets she yet keeps repel this arrogant, self-controlled gentleman she has married?

Read the rest of the chapter: http://dreneebagbypresentsfirstchapters.blogspot.com/search/label/Natasha%20Blackthorne

And Here's an Excerpt!!!

By reading any further, you are stating that you are 18 years of age, or over.
If you are under the age of 18, it is necessary to exit this site.
Copyright © Natasha Blackthorne, 2011
All Rights Reserved, Total-E-Ntwined Limited, T/A Total-E-Bound.
Excerpt From: White Lace and Promises

“You’re going to have to behave.” 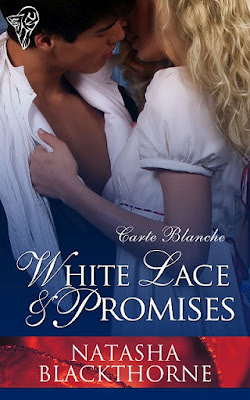