You should comment early and often. Why? The winner's choice of a $25 GC to either Amazon, AllRomanceEbooks or Loose Id for one randomly drawn commenter during the tour is up for grabs. How cool is that?

You can follow the tour here: http://goddessfishpromotions.blogspot.com/2011/10/virtual-book-review-tour-soul-seduction.html I'm telling you, you want to comment. This is a great prize and a fun tour. Plus, the more you comment, the better your chances to win.

But let's get down to brass tacks and start this interview! Hi Lori, so glad you could be here.
What was your favorite scene to write in Soul Seduction?

I love writing the scene that introduced Terry, Ashlee’s slayer’s mentor. He’s a spunky, quirky character and I love him. That whole scene from beginning to end was a joy.

What was the inspiration behind Soul Seduction?

I’ve always loved demons and supernatural hunters but the truth is anime and gaming. And the enemies in those games just randomly respawn. So I built a world around something I love *puts on her geek hat* 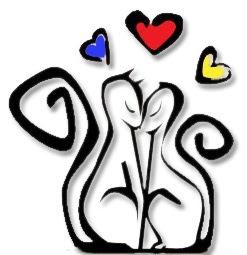 What is the most interesting thing you’ve done in the name of research?

Sword browsing. I have some really great ideas for how the sword Ashlee carries looks like. I also had to research catacombs all over the world.

The most frustrating side is trying to get it just right. I’m a perfectionist and I would tinker with a manuscript for forever. I just have to let it go into the world. The most rewarding is meeting fans. :D It’s awesome!

I was born in Hollywood, California.

If you could ask the readers one question what would it be?

Just one? Okay, I would ask about books, but this is much more interesting. Do I annoy you with all my talk about my cats?

For my m/m you’re going to be excited! The next in the hopper at Loose Id is “The Long Con” (title subject to change)

The best? Seeing the finished product. When you open your book and the words are there, it hits you that you worked on this with an editor.

The worst? My fear that my book will disappoint you. And that you will hate me for that. (Don’t hate me please!)

What is your method of breaking through writer’s block?

If I’m having trouble writing a certain book, I’ll go back and look at where my plot jumped the tracks, roll it back and viciously delete where I need to.

My characters nagging me. I would stop writing if I could. My hands hurt, I have arthritis in most of my joints but the characters don’t listen.

Can you tell us a bit about what book(s) you have coming out next and what you’re working on now? 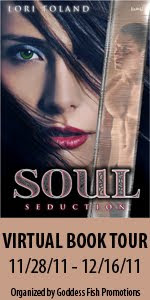 My next book should be “The Long Con” (title subject to change) and right now, I’m working on several books. 1. Sequel to Soul Seduction, tentatively titled Soul Salvation. Going very well too! 2. Replacement Guitarist 2 – because I’m almost done with it. It will be in Blaze (1st half) and Jason’s (2nd half) 1st person perspectives. 3. Save Me – a gay romance about a minister.

Anything romance. I have no boundaries. But I tend to gravitate toward shorter stories.

Pages of tiny details about some interest the character has. If your character is a podiatrist, I don’t need a manual on how he works on feet. Focus on the romance between your characters.

On a guy, his butt. I do love eyes though on anyone.

Early morning. I love dawn and the quiet.

Anything with a beat! Even if it’s bad, although I tend to want to make people laugh with my dancing.

Aliens have landed on the planet. What are the three things you would tell them that are great about this planet?

We all just want to be loved, deep down. Cats are awesome. Finally, before you go, you should really try In-And-Out burgers.

You have been locked in a mall and told you can get anything you want and when they open in the morning you won’t have to pay a single cent. What stores would you hit? Better question how would you haul away all your loot?

Well, at Millennia Mall, they have a Louis Vuitton and Coach so I would load up there. They also have a Tiffany’s and I could so some serious damage there. I would leave Juicy Couture alone :P and Jimmy Choo’s as well because I can’t wear heels. But I would also pick out stuff for my husband and my CP at the Apple store. Since LV has luggage, I would just create a massive luggage train straight out the door!


If you could share one major writing tip, to help other writers in their quest for publication, what would it be?

Never stop! Never give up, never say die. I made that mistake back in 2001 when m/m romance was NOT accepted anywhere. Of course I stopped writing altogether to start a business that is successful today but I shouldn’t have stopped. I should have kept going.

If you could write in any other genre what would it be, and why?

Steampunk. I’m currently developing a Sci-Fi Fantasy series with space pirates. But I love the idea of Steampunk. Who knows how it will all end?

Where can we find out more about you and your work? 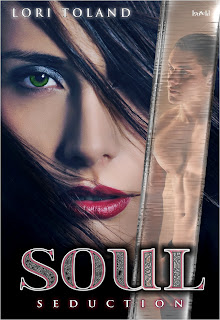 And finally, have you got a sneak peek excerpt from your current work in progress you can share with my readers and me? The hotter the better!

He looked as good as he did every time I saw him, except now he wore a green polo shirt. His grin held little apology as he said, “Sorry.”

He wasn’t being insincere, just mischievous. It reminded me of grade school when Bobby used to pull my hair and then apologize when I cried. “It’s all right,” I said, spying what was inside his bag. “Went grocery shopping?”

“I picked up a few things,” he said amicably, but then a silence stretched out between us. I got my key out, wanting to say so much more but not knowing where to start. “I see you did too.”

Oh my God. I covered up the side of my bag, even though I knew he’d already seen the big yellow rooster with Cocks-A-Lot emblazoned on the side. I really had to have a word with Terry about his packaging. “Uh, yeah.” Way to go. You’re really wowing him with the witty commentary.

He shifted his bag to dig for his house key. “So what’s in the bag?”

“I don’t really know,” I said slowly as my cheeks heated. Luke raised his eyebrow. “My friend owns the shop, and he was just getting rid of some stuff.”

“That’s great,” he said. “Would you like to try those out with me?”

Here's the blurb for Soul Seduction. Looks like a book you'll want to read. I do!

Ashlee Bennett has her priorities straight. Fighting demons is at the top of the list until she meets her sexy neighbor, Luke Byrne. Even though he is human, she can't stop dreaming about his buff body and sexy grin, until her dreams turn to nightmares.

Her world is turned upside down when Luke follows her one night but instead of being afraid, he is only more determined to stand beside her and fight. Ashlee knows she needs to keep her distance from Luke, not just to protect her virginity but her heart as well. But Luke may be the only one who can save her from the night, and her dreams.

Want to know more about Lori? Here's a bio!

Thanks for hosting Lori today!

Always looking for something new to read or gift. Thanks for this wonderful interview. Love reading what authors have to say about the book. Sometimes makes all the difference on if I read it or not.

What a great interview, I loved getting all those fun facts about your Lori. Since you listen to music while you write, do you compile sound tracks for your stories?

Thanks for stopping by today, Lori. Had a great time doing the interview.

I love eyes too. I don't think I have ever read a book about a podiatrist - still laughing.

This sounds really good thanks for the great interview! I love to read about the romance in the book my favorite! Fun blog tour!
tishajean@ charter.net

I'm going to try to post this today. Our internet has been wonky from the street construction going on.

First, thanks for all the lovely comments. I truly love to hear from fans.

Karen H: For movie stars, I prefer to leave this up to my readers. Honestly, my husband stars as Luke when I'm writing *blush* *hides*

Cathy M: For soundtracks to all the books I write, check out my blog: http://loritoland.livejournal.com for a list of the music I listen to when writing. :) Thanks for the question.

Thanks to Wendi for having me by!

I would love to read this new author. Great tour.
usignolc(at)yahooDOTcom

A guy's butt is one of their best features.