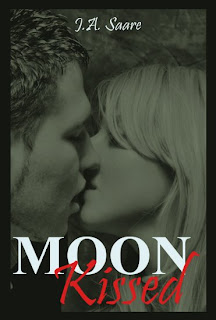 JA Saare stops by the blog tomorrow for an interview. Speaking that I loved A Kiss Before Dying, I can attest to this author being one you need to know!
Moon Kiss Blurb:

When Kassia Lambert wakes in a nice warm bed, alive and intact, she can’t believe her good fortune. She should be dead, considering she was sent head first into brick and mortar. So why isn’t she?

Lycae Adam Trevlian has waited three long years to claim his mate, a human that battles for the Thymeria vampires. After he saves her life, he brings her with him, intent on doing just that. But betrayal and heartbreak is hard to overcome, and even with the kiss of the moon on his side, Adam knows Kassia may or may not forgive his past mistakes.

“Back off,” I snarled and started to leap onto the bed, mortified by the memory and my response to him.

His hand shot out, negating my progress. He guided me back against the wall and stood in front of me, his massive body blocking out the room behind him. The scent was stronger with the source so near, swamping me, encasing me, and I had to bite down hard on my lower lip to silence the moan that threatened to slip past. I slammed my eyes shut to block him out in the only way I could.

“Do you want to know who killed Demetrius?” His words, spoken in a husky timbre, were accompanied by his warm breath against my face. “Aren’t you curious?”

My entire body melted at the verbal caress, and a dumb nod was all I was capable of.

“I did,” he whispered thickly, violently. “I ripped out his goddamned throat before I severed his fucking spine.”

My eyes flew open, and I stammered, “W-what?”

Lycae did not get involved with the Thymeria without the promise of compensation. They detested the blood drinkers, thinking them little more than cold-blooded parasites. If Adam killed Demetrius, he would be owed a heavy boon.

“That’s right,” Adam murmured as I caught on, and he brushed his nose lightly against mine. “Since I relieved the Thymeria of their burden, they relinquished what I desired most.”

He pulled away to look me in the eye, and I blurted, “I don’t understand.”

His warm fingers wound into the hair at my nape, twining gently into the thick blonde strands. “The Thymeria knew of my intentions. That’s why they waited until you were twenty-one to send you after their most sought after Fallen. They banked on the fact I would be there, and that I’d kill the fucking bastard if he so much as touched you.” My hitched gasp of surprise amused him. “You shouldn’t be surprised, love. Vampires are shrewd creatures, if anything.”

As he spoke, I found myself moving closer to his enticing warmth, drawn to the cadence of his speech. His lips appeared so full and soft, so tempting . . .

Damn it! I cursed myself, shaking my head to clear my mind and ripping my eyes away from his sublime face to stare blankly at the wooden floor. My body refused to settle despite my best effort. My breasts felt heavy, my nipples going hard as the soft cotton shirt brushed painfully against the agonized flesh.

“Why would you follow me?” I choked out the question in the same instant I thought it. Distraught by the reaction he produced in me. “You made your feelings clear in New Orleans. Nothing’s changed.”

I tried to move to freedom and was rewarded with Adam’s impressive body pressing flush against me. My knees gave out with the contact of his heated skin, and he wrapped a strong arm around my waist to keep me upright.

“That’s where you’re wrong, Kass,” he rasped and nuzzled my neck, sending vibrations along the nerve endings and creating a scattering of goose bumps along the surface. He brushed his mouth against my ear and whispered, “Everything’s changed.”

Our eyes met, hunter green clashing with mushroom blue, and I froze, unable to move as his face descended, coming closer, then closer . . .

His lips were softer than I’d believed them, and far more gentle than I’d imagined. My eyes fluttered closed, and I moaned when his tongue slid past and caressed mine, darting in tenderly before retreating and coming back once more. Already frazzled senses heightened, allowing me to revel in the smell, taste, and feel of him. Eager and wanton hands caressed the hot smooth skin along his back without shame, fingers delving into solid and unyielding muscle.

He pulled away, breathing heavy, and whispered possessively, “You are mine now. The Thymeria have severed the tie and have placed you into my keeping. You’re of proper age to claim and take as a mate, and that is exactly what I intend to do. I’ve waited far too long for you.”

The words had meaning, but they didn’t compute, buzzing through one ear and out of the other. My mind couldn’t fathom anything but the man directly in front of me. I’d fantasized about Adam for so long I wondered if I had died and went to some eroticized version of heaven.

His laugh was rich, throaty, and deep. “You’re not in heaven, love. Not yet.”
Posted by Wendi Zwaduk and Megan Slayer at 5:57 AM

I'm so glad you enjoyed A Kiss Before Dying! ;) And I can't wait to visit the blog tomorrow!