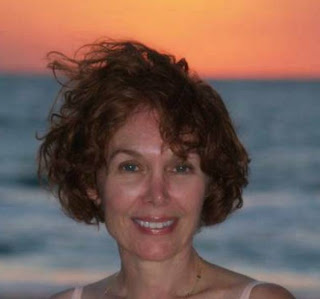 Want to meet a new author? Want to find that next great novel? Then get to know Clare Austin! She's the author of Butterfly. Be sure to check out her other stops on the tour and please do commment! We look forward to hearing form you!

Here's the back cover blurb:
Flannery Sloane is a free spirited bohemian with a soul blessed by Irish musical tradition. She doesn’t give a care for where she’s going or how she’ll get there. Joy and passion are her only map. And, though she’s not interested in falling in love, she wouldn’t mind a little fun with a fine looking man. Hunter Kincade looks like he could fill that bill and have a bit of change left over.
Flannery never wears a watch. She’s late for everything but the downbeat of a fiddle tune. She’s happy serving pints in the pub and playing for tips and smiles. Hunter thrives on punctuality. He is in the music business with his focus on the bottom line. The pretty fid 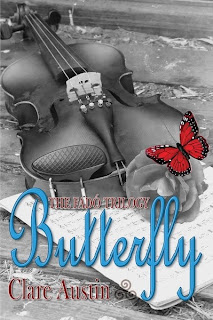 dle player with the bright green eyes would make his next production worth the price of a CD.
Their only common ground is the belief that falling in love is a danger to health and sanity.
Will it take more than Irish magic to pull a man like Hunter into the spell of a woman like Flannery? They are all wrong for each other...and they are so right.

Here's a couple of excerpts:

He lost sight of the fiddler in the mobs of tourists enjoying the April sunshine.
No sooner had he decided to give up on his quest than he heard hands clapping in rhythm with the beat of the now familiar Irish drum.
Then he saw her.
She lifted her instrument and, with the surety of a bird’s wing slipping through the air, bow was laid to strings and life was breathed into melody.
He moved to the edge of the gathering where he could have an unobstructed view of the musicians. She looked up, and he thought she recognized him for an instant. Then her eyes turned and followed another. She smiled and nodded.
Cade had never thought of himself as the jealous type, but he did feel cheated out of that smile.
As soon as the last vibration of strings quieted, a man Cade recognized from O’Fallon’s came up behind the fiddler and, with disturbing familiarity, spoke in her ear. She responded with a hug and an adoring look in her eyes.
Cade had been raised to be competitive, in sports as well as in business, and the appearance of a rival on the field made him want to draw blood. He wanted the fiddler in his studio, and if she ended up in his bed, that might be as nice.
He stood and listened until the sun set and the air held a chill that thinned the throng. The musicians were packing it in.
He hadn’t realized he was staring, until she walked up to him and stood so
close he could smell the scent of her warm skin in the cool evening air. Her approach to introduction took Cade completely by surprise.
“Are you lookin’ at me or waitin’ for a bus?” she said, one hand on her hip and a sassy smile on her lips.

Excerpt #2
Flannery swung through the door into the dining room with a flourish but nearly tripped over a bar stool when she saw the now familiar profile, broad shoulders, and curly dark hair of the man who had come to see her sister.

“Sufferin’ ducks, and if it isn’t himself come to brighten the day at O’Fallon’s.” Cade was as
compelling as she remembered. Today he was dressed in jeans, a black knit shirt, leather bomber
jacket, and a slow smile that would stop a saint in her tracks.

“What can I get you?” She thought a couple of shots of good Irish whiskey would sort him out.

“I’d try the fish an’ chips if you would join me?”

She gave him one of her best smiles, turned toward the kitchen, and yelled, “Hey, Jamie, I’m
taking my break. Give us a one an’ one, a serving of the bangers and mushy peas, a couple o’ Harps, and an Inishowen, would you there?”

“Anything for the love of my life,” Jamie called from behind the door.

“Craic? Inishowen? One and one? Would you like to translate?”

“Whatta ya mean ‘translate’? You speak English don’tcha?” she teased. “Okay...I’m just giving you a time. ‘Craic’ is fun, ‘Inishowen’ is a whiskey from County Donegal, and a ‘one and one’ is what we, the feckin’ Irish, call fish ‘n chips.”

Flannery’s pulse quickened at the way his dark eyes, shaded by long lashes, swept lazily over her, undressing her, right here in a public place. Yes, as her girlfriends back home liked to say, “He was a ride.”

Posted by Wendi Zwaduk and Megan Slayer at 6:20 PM