Welcome to the Honorable Profession by Andy Kutler book tour! There are prizes to be won and an interview to read. You'll want to check it out. You could win stuff! Like? One randomly chosen winner via rafflecopter will win a $50 Amazon/BN.com gift card. How cool is that? Want more chances to win? Then follow the tour. You can do that here: https://goddessfishpromotions.blogspot.com/2021/12/fs-nbtm-honorable-profession-by-andy.html 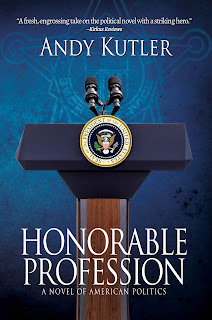 Honorable Profession: A Novel of American Politics is a compelling, hopeful story of a cynical former Secret Service agent and his idealistic daughter as they follow a longshot candidate into the perilous arena of presidential politics.

After resigning from his agency under an ethical cloud, 46-year-old Dan Cahill commits himself to rebuilding his relationship with Megan, the college-aged daughter in Las Vegas he has long neglected. She persuades a reluctant Cahill to join the student-led campaign of a popular professor competing in the Nevada presidential primary against impossible odds. As they face powerful forces conspiring to clear the field, Cahill's deep-seated disdain for electoral politics collides with Megan's higher ideals. Each of their faiths are tested by political allies and adversaries, all desperate for victory, no matter the costs.

Crafted by award-winning author Andy Kutler, Honorable Profession is an absorbing, modern-day political drama filled with authentic and indelible characters, each struggling with their own loyalties and principles as they duel with unscrupulous rivals and the meaning of public service.

We usually don't talk about villains in interviews. Share with us who or what is the antagonist of your story.

On the surface, the villain of this story is a divisive presidential candidate with soaring popularity. But the real villain is the decline of our political discourse, and the toxicity of our electoral campaigns today.

What are the top five things on your bucket list?

You know, I don’t really have a bucket list anymore. Once I hit 40, I started checking those items off, most of which involved touring World War II battlefields and becoming a published author. Quarterbacking the Green Bay Packers is still on there, but people are telling me that might be a reach.

Who is your biggest supporter?

Hands down, my mom. She’s a mom, so I could rob banks for a living and she would still be in my corner. But she’s such a treasure, and has always been there for support, encouragement, and needed doses of laughter.

What can your readers expect from you next?

I’m taking my first dive into non-fiction with a comprehensive book on World War II, told through a 21st century lens. Those who know me, know how passionate I am about that period. There are so many fantastic stories from the war I want to share with young people and history-minded readers.
****************
Now for an Excerpt:

Her eyes were pleading. “You have to win next week. Let me help you.”

“You are helping me, Hope. And I appreciate your good intentions. Your passion to fix what ails your brother, desperate for any solution, I’ve been there. I know what that pain in your heart feels like. But I didn’t get into this race to destroy others. I never wanted to be in a competition among rivals and enemies. I wanted to be in a competition of ideas. Ours are better, that I am certain of. And if this election proves I’m the wrong messenger, I want to see an army of others, like you, who will carry our movement forward. And make the Cure Initiative a reality.”

Hope stood, unenthusiastic, but at least offering a grudging nod as she lifted her tripod again.

Walter smiled at her. “Your integrity, my dear, and my conscience, will remain intact. But fear not, the Vice President will one day learn the same inescapable lesson I am now experiencing.”

“As the Buddhists say, there are three things that cannot long stay hidden. The sun, the moon, and the truth.”
About the Author:

Andy Kutler is a writer and author of two award-winning novels, The Batter’s Box and The Other Side of Life. Andy has also written extensively for The Huffington Post and The Milwaukee Journal Sentinel. Over a 28-year professional career, he has worked in the United States Senate, the U.S. Secret Service, and the national security community. A Wisconsin native, Andy lives with his wife and two children in Arlington, Virginia.

Thank you for sharing the author's interview and book details, this sounds like an excellent read and I am looking forward to it

Great interview, I enjoyed the excerpt and Honorable Profession sounds like a brilliant read! Thanks for sharing it with me and have a terrific day!

Thanks for the great excerpt and interview. The book sounds very interesting.

So, let us proceed with an important phrases in this glossary. Fantasy Sports App White-label Solution that you simply can} start your small business at present on Fantasy Sports software and earn money out of your customers. You can play free slots out of your desktop at house or your cell gadgets while 1xbet you’re on the go! Slotomania is super-quick and convenient to access and play, wherever, anytime. "Slot Machine - Definition of slot machine by Merriam-Webster".