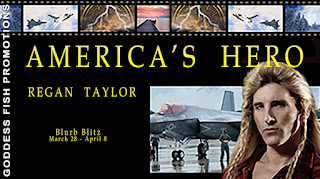 Welcome to today's blurb blitz post! Today I'm featuring America's Hero by Regan Taylor. You'll wan to stick around. There is a great book ahead and prizes to be won. Like? Regan Taylor will be awarding a $25 Amazon GC or a copy of the book to a randomly drawn winner via rafflecopter during the tour. Want more chances to win? The follow the tour. You can do that here:   https://goddessfishpromotions.blogspot.com/2022/03/blurb-blitz-americas-hero-by-regan.html 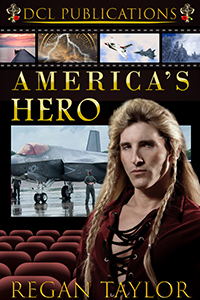 After her F/A-18 crashes Marine Corps Major Cassie Winter embarks on a daring rescue saving both her life and that of her RIO. In the aftermath she returns to her ship and hottie actor, Austin Quinn learns of her story. Quinn is determined to tell Cassie's story with a slight twist -- he will be the hero instead of Cassie. When he arrives on her ship she wants nothing to do with him, but once she is ordered to take him on a flight something strange happens and they find themselves back in time. As they move forward to their own time and beyond the couple finds more than just adventure. He plays America's Hero, but she IS America's Hero.

“I’m telling you, Max,” Cass kicked at the punching bag, followed up with two quick jabs with her fists. “I just can’t believe the Captain sold me out like that.”

Her squadron mate, call sign Sleepy, placated her. “I don’t think he sold you out, Snow. I imagine headquarters thought it was a good idea.”

“It sucks. I gotta play tour guide to this idiot actor—America’s Hero.” She snorted. “He wouldn’t know which end of the bird to head off the boat with.”

“I’m serious. America’s Hero, my ass. Just what I need, some homophobic closet queen actor hanging on my skirt.”

“Who the hell does he think he is? And check this out.” She punched the bag again with three short jabs, not feeling the burn of the canvas against her fists, imagining it was her nemesis, Austin Quinn, on the receiving end. “He is planning on telling my story, my story in a movie with him as the pilot.”

“What is he going to do?” She hit the bag with a solid round house kick, her leg connecting with what would be the shoulder area of an average man, sending a slight tremor down her leg with the potency of the impact. “Cross-dress the part? Don a wig and sashay his way around? And the female lead? What’s she going to do? Stand around and simper?”

“Who said there was a female lead? Although the idea of wearing a dress to fly certainly has some merit.” A deep, clear, male voice that wasn’t Max’s, sounded in the room.

Regan Taylor is originally Seaford, New York and now bucolic Marin County California. Published in both fiction and non-fiction she enjoys quiet days writing, reading with one of her cats on her lap and crocheting. She volunteers with Friends of Ferals in Marin County and considers the feral she cares for, OC, as one of her own. Her past careers include legal secretary, therapist and police dispatcher.

The book sounds very interesting. Thanks!

Hello and thank you for having me! One of the things I love about time travels is the chance to, at least in our imagination, travel to times and places that live in our fantasies or are gone. One of my favorite places to imagine is Atlantis and while Cass and Quinn don't travel that far back in time, there is still something about the mystery of what happened that intrigues me. They do get to go to ancient Troy though and I loved "spending time" there while researching Paris and Helena. If you could travel back to another time, where would you go? Who would you want to meet? Who would you want to be mistaken for?