Today's blog tour concerns the book, Song of the King's Heart by Nicole Sallak Anderson. You'll want to keep reading. These sound like they're going to be cool. Plus, there are prizes to be won. Like? A randomly drawn winner via rafflecopter during the tour will receive a $50 Amazon/BN GC. Want more chances to win? Then follow the tour. You can do that here: https://goddessfishpromotions.blogspot.com/2021/06/nbtm-song-of-kings-heart-trilogy-by.html 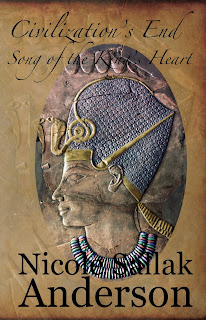 ~~~~~~~~~~~~~
Driven apart by hatred, greed, and tragedy, the golden pair Prince Ankhmakis and the Priestess Natasa are now forced to face the darkness of their fates alone.

After a brutal betrayal from within Ankhmakis’s own family, the distraught prince seizes the throne and is crowned Pharaoh Ankhwehenfer, while Natasa is forced to flee across the sea to a new land, with a new magic. Broken and truly alone for the first time since their bonding, their grief threatens to swallow them whole.

A stalemate is proposed, and as Egypt becomes two nations as in the days of old, a prosperous peace falls over the south. The prophecy has been shattered by the Golden Child's death, yet the royals and their subjects find a way to survive and create an Upper Egypt greater than Ptolemy's northern rule. Alliances with Nubia and Kush bring the promise of hope on the horizon. The next generation comes of age, and the old one passes on their knowledge so that the sins of the past won’t be repeated in their future.

But evil lurks still. There are those both within the Pharaoh’s court and without that would do anything to see the king fall. Ankhwenefer must confront the pain of the past in order to preserve the future for his sons, or his civilization will end.

~~~~~~~~~~~~~
And now for an Excerpt:
The crowd cheered. Their screams were like the howls of furious wildcats. Their nationalism was at its peak, and all he needed to do was stoke it to earn their fealty. He turned to the high priest, who held the crown over his head. The white columns of the temple soared above them, and Ankhwenefer gazed at the hieroglyph-covered walls. In spite of the war, the temple was in pristine condition. All around him were golden statues of gods and goddesses. Animals and other brightly painted forms graced the walls. His flag bearing the phoenix flew high in the wind. Everyone in the room dropped to their knees as their king approached Setep.

“By the power invested in me,” the priest called out, “on this day, the fourth month of Perit, the eleventh day, in the third year of your holy reign, I re-crown you Lord and Pharaoh Ankhwenefer, the Good Being of Isis, Golden Eagle King, protector of our lands and Horus himself. May Amon-Re protect you and our people as we rebuild our nation. Egypt shall reign in glory until the end of time.”

Setep placed the heavy crown on Ankhwenefer’s head. A second priest handed him the hook and flail. He gripped them tightly as he crossed his chest with his arms and, turning to the crowd once more, gazed down upon them.

The sun poured in from the windows and shone upon Pharaoh’s face, and the people rose from the floor and clapped. To those in the room, their new king looked like the statues of Horus himself. Ankhwenefer was master of his domain—young, strong, intelligent, and wise. He’d fought hard for many years and won. The priestesses sang as he walked past and out to the courtyard where the commoners flooded the area, crying and tossing palm branches and lotus flowers at his feet. His entourage followed behind him, leading a procession of dancing, music, and singing, toward the palace where a feast awaited them. Tomorrow, the next phase of his reign would begin—creating peace with the Lower Kingdom, rebuilding the cities destroyed by the war, and most importantly, establishing a court in Thebes, with his sons, and Natasa, at his side. 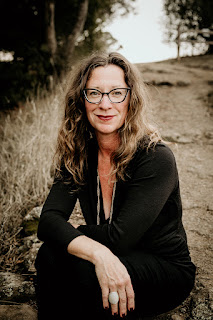 About the Author:
Nicole Sallak Anderson is Computer Science graduate from Purdue University, and former CTO for a small Silicon Valley startup, turned novelist, speaker, and blogger, focusing on the intersection of technology and consciousness. Her essays range from AI and Zen to direct democracy to the loneliness of modern parenting (https://medium.com/@NSallakAnderson/pretty-birds-in-pretty-cages-could-the-nuclear-family-be-the-reason-were-all-miserable-46126d573263) — featured as a top twenty story on Medium. In addition, her work on Universal Basic Income has been included on 2020 presidential candidate, Andrew Yang’s, website: https://www.yang2020.com/policies/the-freedom-dividend/.
Her latest project, The Song of the King’s Heart Trilogy, is a series about the last native Pharaoh of Ancient Egypt and his quest to take back his ancestral kingdom from the Ptolemaic Empire. The first two installments, Origins and Blood and Chaos, are available on Amazon. The last novel in the series, Civilization’s End, will be released October 2021. You can keep up with all her latest writing on her website nicolesallakanderson.com or by following @NSallakAnderson on Facebook (https://www.facebook.com/NSallakAnderson/) , Twitter (https://twitter.com/NSallakAnderson), Instagram (https://www.instagram.com/nsallakanderson/) and Medium (https://nsallakanderson.medium.com/). Feel free to contact her, she almost always answers to any query or comment!

The books will be on sale for $0.99 So get your copy here: https://www.amazon.com/s?k=Nicole+Sallak+Anderson&ref=nb_sb_noss_2

Thank you for sharing the excerpt.