It's a blurb blitz and there are prizes to be won. Check out Sand, Salt and Spirits by Kathryn Hills. You'll want to stick around because this looks like a great read. Also, there are prizes up for grabs. Like?  Kathryn Hills will be awarding a $25 Amazon or Barnes and Noble GC to a randomly drawn winner via rafflecopter during the tour. How cool is that? Want more chances to win? Then follow the tour. You can do that here: https://goddessfishpromotions.blogspot.com/2021/10/blurb-blitz-sand-salt-and-spirits-by.html

And now for the book! 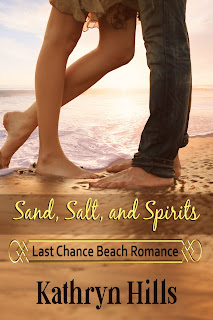 Can a weekend visit to Last Chance Beach undo decades of brokenhearted memories? Conjuring up some island magic might just be their trick. Or treat!

Kyle Worthington hasn’t returned to Last Chance Beach in years. He’s worked hard to prove himself to his overbearing father and the rest of the world. Now it’s October, and the vacation island paradise is celebrating the season with an island-wide Fall Festival. Family obligation demands he participate. Everyone will be there, including the ghost that haunts his grandparents’ B&B.

The running joke that Kyle never sticks with anything—not a career or a woman—will continue to plague him. Unless he brings a knockout of a date to the weekend-long event. Cassandra Corwin fits the bill perfectly. Kyle’s had his eye on his brilliant, beautiful coworker since day one. But Cassie is an enigma, a loner. There’s no room in her life for anyone except Odin, her goofball of a Great Dane.

Will this woman of mystery agree to Kyle’s scheme to impress his family? Can two near strangers from opposite worlds survive family gatherings and back-to-back Halloween events while pretending to be a couple? Kyle’s father seems hell-bent on derailing everything before they even shout “Boo!”

Or will the island’s magic prove too powerful for them to resist?

“And you’re saying you believe in this ‘island love magic?’” she asked in a sexy little voice, speaking over her shoulder as she strolled away from him.

“Hell, yeah. I believe it now. Certainly after you said, ‘maybe.’” Cassie began walking faster. Soon, she was running and laughing.

Kyle gave chase. “Just so you know, I played quarterback in high school.”

“Of course you did, hot shot.” She squealed and giggled when he swept her off her feet and up onto his shoulder. “No, no, no,” she cried when he headed for the water as if to throw her in.

“This dress will turn completely transparent if it gets wet.”

“You do not understand even the basic rules when dealing with men, do you, Cassie Corwin?” Kyle stopped just short of the water. He let her body slide down his slowly until her toes touched the wet sand. Waves lapped at their legs. Hers were bare, so she didn’t care. He wore pants, yet he cared even less.

“You’re right,” she murmured when he continued to hold her. “I don’t understand men. You’re an enigma to me, Kyle Worthington.”

He gently cupped her face in his hands, holding her to him, as he nuzzled her silky hair. “I don’t want to be a mystery. I want only you.”

She released a long, shaky sigh a split second before his lips brushed hers.

About the Author:
The rich history and many mysteries of New England are the perfect backdrop for many of KATHRYN’s books. Winding roads lined by old stone walls, forgotten cemeteries, grand homes with shadowy pasts...all sparks for her imagination. Whether it’s a quaint seaside town or the vibrant city of Boston, it’s easy for this “hauntingly romantic” author to envision the past mingling with the present. No surprise, some of Kathryn’s favorite stories include ghosts! Sprinkle in some magic, and you’re off on a great adventure.


When not writing, this best-selling author is reading, researching, gardening, or cooking up something special in her chaotic kitchen. She shares her colonial home in the north woods with those she loves most – her wonderful husband, daughter, and three crazy dogs.

Thank you for hosting me on your lovely today! I'm so excited to introduce your readers to Sand, Salt, and Spirits! Happy FriYay and Happy Halloween!