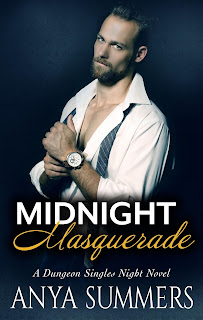 Sophia is in trouble. Again.

Maybe it’s the masks. Maybe she needs to feel something other than regret. Whatever the reason, she is either daring… or foolish… when she trades places with another submissive, and ends up spending the night in her mysterious boss’s bed.

He doesn’t recognize her, but now she’s had him, she knows one taste of his dark love will never be enough.

Gabriel Ryan has one firm rule: don’t sleep with employees.

Even though he’s infuriated beyond measure to discover Sophia in his bed after a night of mind-blowing pleasure, she is now in his blood. He craves her. Needs her. Yearns for her surrender.

But she is forbidden. He will break her with his dark desires.

When Sophia’s dangerous past waltzes into his club, Gabriel must protect her. He must claim her. And break every single one of his rules to keep her safe.

Son of a bitch!

She’d pulled it off again.

Gabriel Ryan surveyed the crowded scene at Eternal Eros, amazed by the transformation of his club. Tonight, it was decorated for the feast of May Day, with May Day poles stationed throughout the club. Great wreaths, and streamers bursting with colorful flowers were draped along balconies and overhead, transforming the black floors and walls into something bordering on ethereal. The patrons in attendance were fully invested, dressed in all manner of costumes from elegant to bawdy, with the added touch of masks, shielding their real personas, allowing them to transform themselves for the Masquerade Ball. In a few short months, his event coordinator, Sophia, had taken his club from great to the crème de la crème of nightclubs in Denver, catapulting it into the top hot spot in the city.

There wasn’t much Gabe relished more than adding to his company’s sizable funds, the exception being finding a sub for the night, and losing himself in the pleasures of the flesh. Not that there had been much of that lately. There always seemed to be one task or another vying for his attention. Eternal Eros was one of many companies under the umbrella of RMD Industries, his family’s conglomerate enterprise that was the parent company for a plethora of businesses—including this club.

Thinking of his event coordinator, he smiled. The ballsy woman was half his size, smart as a whip, immensely creative, and didn’t back away from a fight, not to mention she was a stunning beauty, with one of the purest souls he had ever met.

It really was a shame she worked for him, because she stirred him with her direct gaze and take no prisoners attitude. But since she did, she was in the off-limits category. Gabe prided himself on his control. It was part and parcel of being a Master. In his opinion, a Dom who couldn’t manage his lust and baser instincts, was a piss poor excuse for a Dominant. It was why he followed a set of self-imposed rules he had established years ago.

Rule number one: he didn’t fuck his employees. Ever.

Rule number two: no falling in love. Gabe kept his heart to himself, no matter the scene or the submissive. Nothing good ever came from allowing your emotions to get in the way. It was why he kept his interactions with the opposite sex to the club or the private playroom in his penthouse, but he never allowed the women to spend the night, and didn’t permit them anywhere near his bedroom.

And rule number three: never lose control. A Master who couldn’t control himself and his responses in all things was a sad excuse for a Dom.