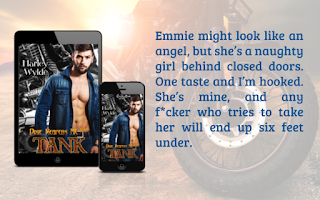 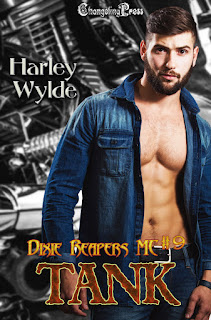 Emmie -- I overheard my father promise my hand in marriage to a man who is so cold I’m not sure he even has a heart. So I did what any young woman would do. I ran. My sister, Federal Agent Lupita Montoya, gave me sanctuary in the US and helped me file the proper paperwork so I could stay indefinitely. Now Lupita is in prison and my time is running out. My father and Ernesto will be coming for me. When Lupita sends me to the Dixie Reapers compound in Alabama, I know they’re my last hope. I just didn’t count on falling for one of them.


Tank -- The hot little Latina I’ve had my eye on for three weeks is in trouble, and the time for waiting is over. I thought I’d claim her, get those Spanish bastards to back off, but then she knocked me off my feet. Emmie is really Emelda Montoya, sister to the woman I chased around Christmas, and someone my club owes a debt. It makes Emmie hands off, but I’ve never been good at backing down, especially when I see something I want. And I want Emmie to be mine. She’s over a decade younger than me, but I’m not going to let something like age stand in my way, and I’m sure as hell not going to let her mobster father get between us. I’ll bury him if I have to, along with that sick bastard, Ernesto.


But the more digging my club does, the more twisted the tale becomes. For the first time in my life, I’m not sure we can handle the trouble that’s landed on our doorstep, but I will die trying to protect the woman I’m falling for, the woman I accidentally knocked up, the woman I call wife.


Warning: Contains some violence and some darker themes. If you’re looking for a sweet read, this isn’t it. There’s melt your panties sex and a biker who will stop at nothing to protect the woman he loves.

Pre-Order for February 8th at Amazon

Take Me to Church by Hozier


Bad Girlfriend by Theory of a Deadman


My House by Flo Rida


She by Green Day


Better Sorry Than Safe by Halestorm


Youngblood by 5 Seconds of Summer

The way he looked at me, the heat of his body and the touch of his hands, was enough to make me want to beg for more. I wanted to experience everything with him, wanted his lips on my body, his cock inside me. Even though I was a virgin, I’d read enough and watched some porn that I thought I was prepared for what would happen between us. When he cupped my breasts and took first one nipple, then the other into his mouth, sucking hard on the tips, then grazing them with his teeth, I shuddered and wished we had fewer clothes between us.

I wanted to see him, to explore every inch of his body. The thought of exposing myself like this to someone had always frightened me, but not with Zach. With him, this just felt incredibly right. I remembered my mother once telling me that when you met your soulmate it was something you just knew. She’d had a wistful look on her face, and I’d thought at the time she was speaking of my father. As I got older, I realized that she could have never loved my dad and had probably been in love with another man at some point. I didn’t want to be like her, look back and realize I’d missed out on something great because I was too scared.

He rocked his hips against me and I felt the ridge of his cock. He felt huge and I worried a little that he’d be too big for me, but I trusted him not to do anything that would hurt me. He might be this big brute of a guy, and he claimed to have a violent side, but with me he’d been sweet and gentle. Even now, he kept his touch light enough that he wouldn’t bruise me. From what I’d learned from my roommates at college, most guys didn’t think about much other than themselves. At least the boys at school were that way. Maybe one day they’d become men like the one sending waves of pleasure through me.

“Zach,” I murmured, holding him to me as he sucked at my nipple again.

I squirmed, wanting more but not knowing if I should ask. Would he think badly of me if I said wanted things to go further? He said we were strangers, and we were, but he didn’t feel like a stranger. When he held me, it felt like I’d come home for the first time in my life, like I was exactly where I was supposed to be. I didn’t think he wanted to hear that. Men didn’t like crap like that, did they?

He nuzzled my neck, then licked at my jaw before kissing me. “What do you need?”

Heat flared in his eyes and he tapped my thigh. I stood on shaky legs and Zach slowly reached for my pants, pausing with his fingers over the button. I gave him a nod and he unfastened my jeans and pushed them down my legs. I stepped out of them and he groaned as he stared at my plain panties. Lightly, he ran his fingers across the front of them before giving them a tug. They fell to the floor and I stood before him completely exposed. He licked his lips as he stared at my pussy.

“You shave the hair off?” he asked, his voice rougher than before.

“One of the girls at college talked me into going with her for a wax. I liked the way it felt afterward, so I kept going back,” I said. “Is that a good thing?”

His gaze caught mine and he gripped my waist, then lifted me onto the table in front of him. He pushed my legs wide and I could feel myself opening to him. He groaned and stared before running his fingers down my slit.

“So fucking wet,” he said. “You ever played with yourself or used toys?”

My cheeks warmed. “No. At home I was too scared to try something like that, and at college I was never alone.”

“You’ve never had an orgasm, even by your own hand?” he asked.

“Christ, Emmie.” His eyes slid shut and his jaw went tight. “The things I want to do to you. You should tell me no, put your clothes on, and get the hell out of the kitchen. Go lock yourself in the bedroom or something.”

“What if that’s not what I want? What if I want you to do all those things to me?” I asked.

“You don’t know what you’re saying. If you could see the things I’m picturing, then you’d run.”

He growled and stood so fast his chair tipped over. “You shouldn’t have said that, Emmie. I was holding on, barely, but I was managing. Giving me an open invitation wasn’t your wisest decision.”

I stared at him. “Maybe it’s exactly what I want. I’m probably the only twenty-one-year-old virgin at school. I want you, Zach. I trust you.”


Who is Harley Wylde?

Harley Wylde is the international bestselling author of the Dixie Reapers MC and Devil's Boneyard MC series. She writes alpha men, strong women, and romances so hot they'll melt your e-reader. Visit Harley at harleywylde.com!
Posted by Wendi Zwaduk and Megan Slayer at 12:30 AM