Guest Post: A Must to Live for by Katherine Wyvern

Hello, and thank you so much for hosting me and my new release, A Muse to Live For.

A Muse to Live For is the third installment in my loosely interconnected “transgender trilogy”, which includes also Woman as a Foreign Language and Spice & Vanilla. While WaaFL and S&V are very obviously connected (they have two characters in common), the threads connection Spice to Muse are much subtler, so much so that I consider it almost a game with my readers to find them.

Unlike the other two books, which are Contemporary Romance, Muse takes a plunge back into the past and is set in the 1880s.

This is part of why it took me so long to write it (almost a year, on and off). Much as I am familiar with Victorian England from having read so much Dickens, and Conan Doyle, and the Brontë sisters, and a number of other books written or set in that period, whenever one begins to write, one discovers how many details they are still missing. How much did a shave cost? How did you ride a cab? Where would a poor Irish immigrant likely live? How do you wear a bustle dress? How do you fix one if it’s worn?

It became so fascinating to research all these things (and much more) that I spent more time in Victorian London than I had ever intended, and once more, a short story became a novel (story of my life).

The main reason for choosing a period setting however was not the fancy costumes and moody atmosphere, but a desire to write a story about an artist of that amazing period, when the Pre Raphaelites, the Symbolists and the Impressionists were changing the face of art, and to write a transgender character before transgender became a thing, before there were any labels or any sense of belonging to a group.

It is the deepest trip I ever took into the emotions of any two characters, through obsession, depression, love and wonderful fulfillment, and both characters have some autobiographic relevance to me. It’s my favorite story to date. 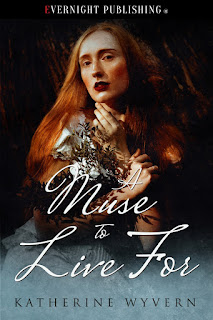 An artist lives to create. When Nathaniel’s urge to paint died, so did his will to live.

Until the night he meets Gabrielle.

Gabrielle may be just a poor prostitute, but she has the beauty of a Pre-Raphaelite stunner and the otherworldly aura of a fallen angel. She also has a secret. Gabrielle is Gabriel, and when Gabriel’s dark past comes knocking and Gabrielle must abandon her new career as an artist’s model, Nathaniel’s whole world comes crashing down again.

Better to die than living without her love, and the breathtaking creative drive she brought him. But it’s dead easy to die for a woman. Any fool can die for love. To live for it, that takes altogether more courage, doggedness, and imagination. 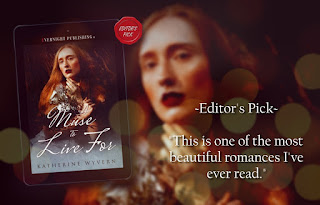 I am not sure how to touch Nathaniel. I want him to kiss me again, I want him to hold me, I want him to look at me that way he does in his studio, when he watches every line of my body and sees a woman. And at the same time, I wish he would see me for what I am, all that I am, once and for all, so I don’t have to hide anymore.

So I shed my jacket, and the blouse underneath. I shiver a little in the cold when my arms are bared, and he runs his warm palms on my goosebumps, soothing them.

Then I stand to unbutton my skirts and petticoat, and untie my bustle, and I let it all swish down around my knees, and I stand here naked, in my small chemise, and stockings and corset, and my boots.

I am still silk-skinned and woman shaped.

Except for that one thing.

I steal a glance at his face—I can hardly bear to look at his eyes, standing here so naked—thinking he will wince, or frown. Or scream, what do you know. You can never tell, with a sensitive artistic temperament.

But he does none of these things.

Instead he goes to his knees on the floor, like a man about to propose in some play, and with a sort of mute reverence he strokes my thighs and my buttocks, and the back of my knees, through the stockings. When he lays a kiss and then his forehead on the hard of my hip, where the bone pokes sharply under my skin, I put my hands on his crazy hair, and hold him there, and with the barest, lightest touch of his fingertips he caresses the front of my corset, on my belly, and then down, down.

And to my acute embarrassment, the damn thing shivers to his touch, stiffening, rising.

Well. He has certainly seen me, now. He really has.

He is not screaming.

I pull him to his feet and I step out of my puddled skirts, and gently I undress him. Jacket and shirt and trousers and drawers, socks, everything.

He is as tall as I am, which I had never noticed, because he always stands with his head bent and his shoulders slumped. He’s not muscular, but there is no fat on him either. He has well-built bones under his lumpy clothes—he badly needs a good tailor—and he would be rather handsome if he held himself straight, with his chin up, and didn’t look so much at odds with himself. He’s pale, but not as pale as I am, and there is just the merest spray of hair on his chest.

I caress his skin all over as I undress him, and he looks transfixed, as if it had never occurred to him that it takes two to dance this dance. Perhaps he thought I’d make him spend the night on his knees adoring me.

The heat of his skin is like a deep current, and it draws me to him.

We stand here mute, the only sounds the drumming of the rain and the swish of falling clothes, and gently kissing lips.

When I push him to lie on the bed, I have a moment of dread that he might want to do that to me. I cannot have it. I will not be taken that way ever again.

But I am not afraid of him. I do not believe he’d be capable of hurting a fly, let alone me.

“I love you,” he whispers, his lips on my ear, so that words are made into a caress, “I love you, I love you.”

“Hush,” I whisper back, bearing down on him, grinding my cock on his. “Don’t say such things. It cannot be. It can’t.”

“This night, this once, please, let me say it. I love you, I love you, I love you.” His body rises to meet mine, and I feel those tears spilling now, with joy, and grief, and pity. Pity for him, for me, for both of us, lost in this narrow garret under the drumming rain, orphans in this storm, desperately naked in this terrible iron city.

“Only this once, then,” I whisper. “Tomorrow, you must forget.”

And before he can answer or kiss me again, I slip out of his arms, and down, along his chest and belly, so he cannot see me cry.

I have pleasured so many men this way, but never one I loved, and maybe it’s the same thing, and yet it’s something altogether different. He’s all silk and warmth and heaving life and fire pulsing, and his flesh matters to mine, so that my whole body loves his.

“You—don’t—have—to do this,” he whispers at first, but then he surrenders finally, and lets the pleasure take him.

I told him, the first time we met, that I’d do him for free. Who would have guessed, then, that I would end up doing him for love?

And I don’t know if he’s a virgin—but he is indeed quick. His cock grows even tauter on my tongue, and he breathes in short, hard gasps a few times. When his body arches and heaves and his hand fumbles at my cheek, I hold him, and hold him, and hold him… He comes with a broken moan, hotly. I swallow it all.

On the street I never do. But here, now, with him, I could not bring myself to spit.

Find A Muse to Live For at Evernight:

I have entered that age when looking at beautiful male models in their prime makes me a cougar, ahem.

Almost all my heroines are short: that’s because I look at the world from hobbit level. Being so small I am three times more concentrated (read: obsessive) than anybody I know. I am exhaustingly creative in writing, arts, crafts... Sometimes my brain gets friction burns from hurtling at such speed from one universe to the next.

I love animals, plants, and occasionally even people.

Like the Highlander I come from a lot of different places. I was born in Italy but lived here and there and consider myself simply and deeply European. I love Europe passionately, its antiquity, its diversity, its quirkiness. All my books are set in Europe, or alternate versions of it.

I have been writing since I can remember.