This post is part of a virtual book tour organized by Goddess Fish Promotions. Susan Mac Nicol will be awarding a copy of Feat of Clay + Damaged Goods to a randomly drawn winner via rafflecopter during the tour. Click on the tour banner to see the other stops on the tour. 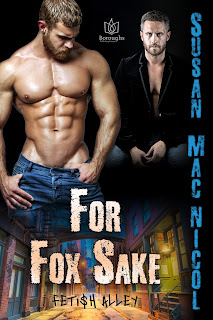 Tate and Clay's newest case has all the earmarks of typical investigative work: lies, deception, collusion, and a dead body - except the body was found in Fetish Alley, and nothing that happens there is typical.

Tate sat beneath the covers, his iPad propped up against raised knees as he scrolled down the screen. His brow furrowed as Clay climbed in next to him. “Look at this. Rick’s sent me the police report from Dixon’s case. No one could find them earlier in the station. He made a stink about it and hey, presto. Now we have it.”

Clay picked up his reading glasses from the bedside table, unfolded them, and perched them on his nose. “What am I looking at?” he enquired, peering over at the tablet.

Tate’s finger moved across the screen as he pointed out areas of interest. “The man who alerted the cops didn’t find the body himself. He saw a severed hand, and what appeared to be a costume, then called the cops.”

Tate nodded. “I know. Turns out it was a prop, something used in a previous production of who knows what. The place was full of old stage stuff.” He ran his finger across another area of the report. “The cops checked it out, just in case, and they were the ones who discovered the real live body.” He sniggered. “Well, not live, but you know what I mean.”

Clay did. His partner’s dark and often twisted sense of humour was entertaining even if sometimes it bordered on being downright scary.

Tate frowned. “They found Dixon in the basement, still dressed in his fox costume. He must have had his suit on underneath, because, look here.” Tate pointed to what looked like an amateur mobile phone shot. “There’s a cufflink right there.”

Clay leaned in and sure enough, there was a gold cufflink in the shape of a fox in the right shirt cuff. “Hmm,” he mused. “The report says he’d collapsed there on the spot. Then the doctor on scene confirmed it looked like a heart attack and that was it. No bloody post-mortem or anything.” He rubbed his chin thoughtfully. “He must have been boiling in his suit and the costume. I suppose it was a cold night, and it was raining, so that might explain it. I’d be interested as to why no one saw a man dressed as a fox walking down to the theatre. I mean it’s not that far from the club, but the area is populated.”

Tate nodded. “I wondered about the lack of witnesses too. Someone should have seen something. And how could the cops not find the death suspicious, even a little, when the man was wearing a fox costume over his suit?”

Susan writes steamy, sexy and fun contemporary romance, some suspenseful, some gritty and dark, almost all M/M, and some stories that she hopes makes you think. She’s also Editor in Chief at Divine Magazine, an online LGBTQ e-zine, and a Charity Board trustee at The Being Me Campaign in London.

Susan attained PAN status with the Romance Writers of America with her first M/M book, Stripped Bare. She’s currently a member of The Society of Authors in the UK, and the Authors Guild in the US. She enjoys being a member of Queer Romance Ink, All Author, Book + Main Bites and the Paranormal Romance Guild.

She loves going to the theatre, live music concerts (especially if it’s her man crush Adam Lambert) walks in the countryside, a good G &T, lazing away afternoons reading a good book, and watching re-runs of Silent Witness.

Her chequered past includes being mistaken for a prostitute in the city of Johannesburg, being chased by a rhino on a dusty Kenyan road, getting kicked out of a youth club for being a ‘bad influence’ (she encourages free thinking), and having an aunt who was engaged to Cliff Richard.

Thank you so much for being part of the tour :)