This post is part of a virtual book tour organized by Goddess Fish Promotions. Sue Perkins will be awarding a PDF ebook of The Sixth Key to a randomly drawn winner via rafflecopter during the tour. Click no the tour banner to see the other stop on the tour. 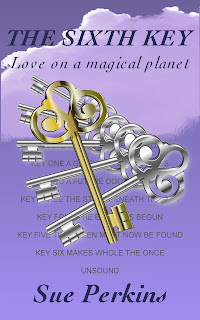 Kidnapped, taken to another planet - how much worse can Riley's life get?

The kidnapper is her boyfriend Jothur and Sacral is his home planet. The castle inhabitants are psychic, mainly telepaths, and they are at odds with the Mutes in the forest. The psychics' plan is to discover how Riley blocks her thoughts. This will help them completely eradicate the Mutes who are a mixture of free telepaths and non-telepaths.

Riley seeks help from the Mutes and meets Tynan, their leader. She hopes he will help her escape the tests the telepaths want to do. Instead she discovers the magic of Sacral is dying due to an imposter being on the throne.

Riley and Tynan work together to discover the real king and place him on the throne. Part of the plan relies on Riley returning to the castle to delve for more information. Will she survive or will her mind be torn apart by the tests?

On the far side of the room Riley noticed a large carving on the wall. She crossed the room and examined the two panels, each depicting life on Sacral. At the top of each panel, identical carvings caught her attention. A long-tailed bird flew out of high-reaching flames. The carvings reminded her of a phoenix rising. This did not help her find clothing for her body. Riley looked at the panels again.

I wonder. Could they be doors? It’s a good way to keep them from destroying the beauty of the room.

The panels had no obvious way of opening – no handles, no indents in the appropriate places to provide finger holds. A push and a pull nearly broke her already short nails. The doors remained stubbornly closed.

Tears pricked Riley’s eyes. How could she appear at her best before the king, not to mention Jothur, without any clothes? These had to be doors to a clothes cupboard. There weren’t any other options in this room.

“Think Riley, think. What other ways are there for doors to open?”

Various ideas came to mind and she tried them all to no avail. What had Jothur told her about his planet? ‘…ruled by magic instead of science....’ In desperation she cried out “Open Sesame.” To her surprise the doors swung open to reveal a walk-in closet and dressing room. 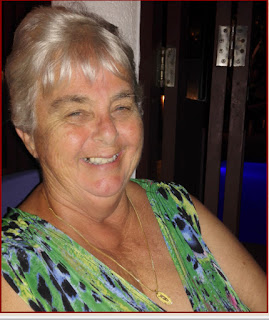 Sue Perkins emigrated to New Zealand in the 1980s. A few years later she took a creative writing course, then started writing novels and short stories. Despite rejections from several publishers Sue persevered and in 2006 she won the Pacific Region of the Commonwealth Broadcasting Short Story Competition. The following year her first romance novel was published.

In the intervening years Sue has had ebook and paperback novels published for middle grade, young adult and adults, mainly in the fantasy genre. Dragons and magic are her favourite subjects in fantasy, but ghosts are also making their appearance in her young adult books.

Thank you for hosting my blog blast. Hope everyone is keeping warm. I live in the Southern Hemisphere so the weather is very hot at the moment. Hope you enjoyed the excerpt and don't forget to enter the draw to win a free book of The Sixth Key.

Thanks everyone for visiting the blog blast. I hope you enjoyed the excerpt and put your name in the draw to win a free copy of The Sixth Key.Thanks also to my hosts for their invitation to visit their blog.