Storms Over Babylon by Jennifer Macaire

Get ready for the storm - it's coming June 14th!

Ashley knows Alexander is going to die, unless she can somehow trick the Time Senders. In Babylon, everything is coming to a head. 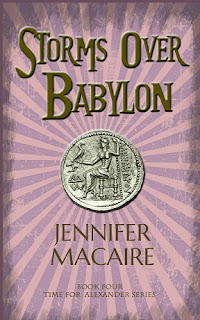 From the scorching plains of Persia to the opulent city of Babylon, Ashley and Alexander continue their sensuous and passionate journey through history. Alexander the Great is now king of Persia and Greece – but his reign will be short. Time-travelling Ashley knows when her husband will die. She’s determined to cheat Fate and save Alexander and her children, even if it brings the gates of time crashing down. Following Alexander on a tour of his new kingdom, she plans her moves and bides her time. She must, however, convince Alexander to abandon his crown and his kingdom. 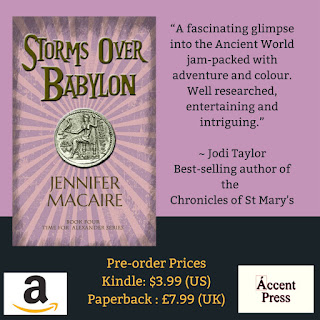 In the month of May, the weather took a turn for the worse. Thunderstorms boomed over the city and there were swarms of hungry mosquitoes at night. Alexander had to oversee religious celebrations, some lasting until very late, and one evening he came back with a slight chill. I didn’t think much of it. Usse gave him some hot tea, and we lay down in bed. Plexis was already asleep, lying in his own bed next to ours. The mosquito netting moved slightly in the breeze. It was much cooler than it had been all week; the rain had cleared the air. During the night, Alexander developed a high fever. The next morning he could hardly move, his muscles cramped and he was drenched in sweat. It was malaria. ‘How do you feel now?’ I asked him for the hundredth time that day, after Usse gave him his medicine. Alexander opened one eye and stared at me. It was his blue eye, I noticed. ‘I would feel better if my head stopped hurting,’ he admitted. ‘The fever is making me thirsty. Do you have any water nearby?’ ‘Of course.’ I poured water from the pitcher into his golden cup and held it for him as he drank. The muscles in his throat worked as the water went down. Then he lay back on the bed with a sigh. ‘Do I die of malaria then?’ he asked. He tried to grin, but his mouth trembled suddenly. I leaned down and kissed him on his lips. They were hot and dry despite the cool drink. ‘Are you afraid?’ ‘I thought I wouldn’t be.’ He took a shaky breath and let it out slowly. ‘But that was when I thought the only thing that counted was my kingdom.’ ‘And now?’ I asked him. ‘I’ve had time to think. When you saved Plexis that’s when things began to change for me. I realized something I hadn’t known before. I want to stay with you. I love you, Ashley of the Sacred Sandals. I have told you that twice before. I should have said it more. Now, with this fever making my bones ache, I will tell you a third time. I want to see the babe you carry. I want to grow old surrounded by my loved ones. I no longer want to die. Does that answer your question? Yes, I am afraid.’ ‘Don’t be afraid. I love you too, Alex.’ ‘So why do you cry?’ He reached a hand to my cheek and brushed tears away. ‘Because I never dared hope that you would let go of your dream.’ My tears fell faster now. Teardrops sparkled on his hands like diamonds. ‘It took me long enough to understand that my dream was an empty one without you and Plexis by my side, and that my future was an illusion. Ashley, don’t cry. Please. I feel as if I’ve woken up from a long nightmare. All the battles and bloodshed, all the good men who died following me, they will lie on my conscious for ever. Only you will be able to ease my mind. You have seen the future, so you can tell me that it was not all futile.’ ‘Of course not, Alexander. Nothing you did was futile.’ ‘It feels that way now,’ he said. His eyes were very bright. I frowned at him. He was starting to sound distinctly un-Alexander-like. I put my hand on his forehead and jerked it back with a muffled cry. He was burning up.

About the Author: Jennifer Macaire is an American living in Paris. She likes to read, eat 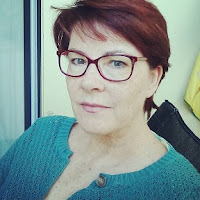 chocolate, and plays a mean game of golf. She grew up in upstate New York, Samoa, and the Virgin Islands. She graduated from St Peter and Paul High School in St Thomas and moved to NYC where she modelled for five years for Elite. She went to France and met her husband at the polo club. All that is true. But she mostly likes to make up stories. Jennifer's blog and website: https://jennifermacaire.blogspot.fr/ https://authorjennifermacaire.wordpress.com/