One Night With You 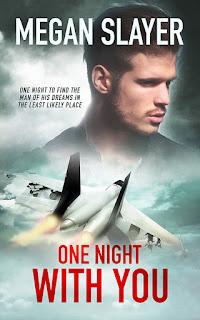 One night to find the man of his dreams in the least likely place…
Airman Tate Gibson thought going to a party at the local college with his friends would take his mind off his troubles. He’ll head back to Korea in two days’ time—after the funeral of his baby sister. He’s always taken responsibility for her and he’s not ready to deal with her being gone. He wants someone to help him deal with his sadness and give him a reason to get through his deployment.
Raine has had a crush on his neighbor across the hallway, but once he spots the hunky airman his thoughts center on Tate. He wants to strip the handsome blue-eyed hunk down and lick him everywhere, but geeks like Raine never get the man. He’s stuck playing the perpetual wallflower.
Will one night tear them apart before things get hot or will it be enough to bring these two wounded souls together for a long-term engagement?
Publisher's Note: This book has previously been released as part of the Brothers in Arms anthology with Pride Publishing.
https://books2read.com/u/4AgPYd
And at Pride Publishing: https://www.pride-publishing.com/book/one-night-with-you
Amazon.com.au: https://www.amazon.com.au/One-Night-You-Megan-Slayer-ebook/dp/B01MS6F056/
Amazon.jp: https://www.amazon.co.jp/One-Night-English-Megan-Slayer-ebook/dp/B01MS6F056/
Amazon.co.uk: https://www.amazon.co.uk/One-Night-You-Megan-Slayer-ebook/dp/B01MS6F056/
Amazon.de: https://www.amazon.de/One-Night-English-Megan-Slayer-ebook/dp/B01MS6F056/
Available for only $.99!!

Tate sighed and gripped the nearly empty bottle. He shifted on the seat enough to look at Raine. “You asked me, so I’ll ask you. Where’s your boyfriend?”
“Don’t have one.” The blush returned. “Single and ready to mingle or whatever it’s called.”
“Oh.” Perfect.
Raine waved his hands. The beer sloshed in his bottle. “Strike that. I mean… Christ, I don’t know what I mean. I don’t have a boyfriend. The last time I tried to date, the guy said I was too nerdy and turned me down.”
He placed his palm on Raine’s thigh. “What if I said I wouldn’t?”
Raine dropped the bottle onto his lap and yelped. “Wait. Wouldn’t turn me down?” He wound his fingers around the neck of the beer and stared at Tate. “You just met me.”
“So?” Tate stood, then put his bottle on the makeshift coffee table. “Sometimes things are meant to happen fast.”
“Fast maybe, but are you sure? I’m…no one. I bet Blake has a guy over there that’s more like what you want.” He scrambled to his feet. “Someone hotter.”
“You’re one of the sexiest men I’ve ever met.” Tate tugged Raine into his arms and stuffed his hands into Raine’s back pockets. He liked the way they fit together. “Dance with me. The music is just loud enough for ambience.”
“Sure.” Raine bowed his head and draped his arms around Tate’s shoulders. “I’m not very good at dancing.”
As they swayed together, Tate held Raine to his chest and breathed in the scent of him. Spicy, but fresh. He rested his chin on Raine’s shoulder and feathered a kiss over Raine’s neck. “You’re doing a great job.”
“Am I?”

Posted by Wendi Zwaduk and Megan Slayer at 3:00 AM