This post is part of a virtual book tour organized by Goddess Fish Promotions. Anya will be awarding a $15 Amazon or B/N GC to a randomly drawn winner via rafflecopter during the tour. Click on the tour banner to see the other stops on the tour. 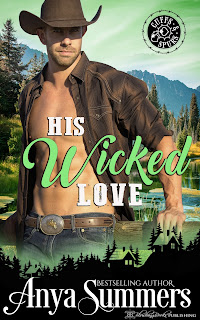 Mason Stewart is in a pickle. He and his brother are the co-owners of the Black Elkhorn Lodge and Resort. Their dream stands at the precipice of utter ruin because their previous chef embezzled every last dime of savings they had for the lodge. In a last ditch effort to save his business from the brink of annihilation, Mason hires a new chef for their restaurant; sight unseen.

Nothing can prepare him for Emily, the red-haired siren who waltzes into his resort, carting a set of chef knives and demanding to see her new kitchen. She challenges his authority. She inflames his every wicked desire. She is everything he has ever wanted. And he can’t touch her. He’s her boss. And it would be wrong to give in to the incendiary heat between them… wouldn’t it?


Read an Excerpt: “Are you sure this new chef can cook?” Cole asked, a pensive expression creasing his brow.

Fuck if I know. “She comes highly recommended. Has a been a sous chef for two years.”

Mason glanced up and was glad he was seated. Emily Fox’s resume and background checks had provided him with a boatload of facts about his new hire. But they hadn’t prepared him for the red-haired siren currently standing in the wooden door frame. The long waves of her hair reminded him of the sunset, the myriad hues of burnt orange and sienna hung over delicate shoulders and more than ample cleavage before ending above her trim waist. Her skin was smooth and the color of iridescent pearls, which only seemed to magnify the natural pale pink hue of her lips that were not overly plump but perfectly formed.

Yet it was her eyes that were the real killer. On top of a voluptuous form that made the Dom in Mason want to weep in thanks, her hazel eyes were large pools that sparkled with lively zest and were surrounded by a wealth of inky lashes. Intelligence flashed in her gaze. The electricity of it zapped through him.

“You must be Emily Fox,” Mason said, finding his voice after nearly swallowing his tongue. Standing, now that he’d found his legs, he shoved away the unwanted and rather inconvenient lust she evoked in him.

“You’d be right about that,” she said, with a hint of sarcasm that she softened with a grin as she placed her free hand on her denim clad hip. The other clutched the handle of a small leather satchel about the size of his goody bag. He must have been in a mood when they’d briefly talked on the phone because the sound hadn’t affected him as it did now. The dulcet tones curled along his spine, into his gut, and made his dick twitch.

“I’m Mason Stewart. This is my brother and business partner, Cole,” Mason informed her. His gaze roved over her form. While she was dressed casually, in a pair of well-worn blue jeans and fitted mint green Henley top that accentuated her curves, with a black jacket tied around her waist, Miss Fox was anything but casual. She was stunning—exotic, even. He couldn’t help but wonder what she looked like naked.

Yet her demeanor didn’t scream Rodeo Drive. That was good. It made her appear accessible and down to earth. As though, perhaps, if he and Cole played their cards right, she wouldn’t mind trading in city life for country life in Wyoming.

“Pleasure.” Emily smiled and nodded towards Cole, who tipped his hat in her direction in greeting. From the expression on Cole’s face, Mason surmised he wasn’t the only one a bit taken aback by her looks. It should make him feel better that he wasn’t the only who’d been momentarily struck dumb, but it didn’t. He couldn’t afford to be attracted to the newest chef. The paradox of it, given their current situation, was not lost on him.

“I’m glad you made it early. Hopefully the drive wasn’t too hard on you. If you like, I can have the front desk get your belongings to your cabin. Then I can show you the restaurant and where you will be working,” Mason said as he emerged from behind his desk and walked toward her. He gestured with his hand outstretched to take the case from her and help her out. Miss Fox really was a small thing. While he was six one, he had to look down to meet her gaze. He hadn’t known what to expect—certainly not the vision before him.

Yet instead of handing it over, she shifted the case behind her back and held her other palm up, stalling his forward progression.

“Hold up, cowboy, no one touches my knives without losing body parts. I know I agreed to accept the position over the phone, but I need to see the kitchen first before we go any further,” Emily said, her sultry voice making him think of sex. Long, languorous, Tantric style sex before a roaring fire. Sex that left a body boneless and too sated to move. Her voice was sex, plain and simple. And it made his dick hard in his jeans. Mason tempered the unexpected and rather unwanted desire she stirred within him. Or tried to.

Instead he settled on annoyance with a simmering underbelly of lust, which only served to piss him off.

Anya is a bestselling and award-winning author published in multiple fiction genres. She also writes urban fantasy and paranormal romance under the name Maggie Mae Gallagher http://www.maggiemaegallagher.com/. A total geek at her core, when she is not writing, she adores attending the latest comic con or spending time with her family. She currently lives in the Midwest with her two furry felines.