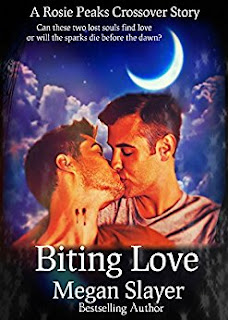 Mix one vampire with one human who doesn’t believe in the paranormal and add some sizzle.
Anson wasn’t looking for a partner when he spotted the handsome human, but he’s not about to argue when the mood strikes. He’s got to bring a date to the Halloween bash and Parker fits his bill exactly. Now all he needs to do is convince Parker that vampires truly exist.
Parker is practical, intelligent and a little on the geeky side. He can’t believe his eyes—a handsome man has not only hit on him, but asked him out…to a masquerade ball. He doesn’t believe in vampires, but Anson wears his Dracula costume a bit too well.
Can these two find love and trust after all or will the sparks only last until the dawn?

“Okay, then where’s your boyfriend?”
“Don’t have one.” Not since Seth dumped him a year ago. Seth wanted to sleep around and Parker wanted monogamy. According to Seth, gay men couldn’t be monogamous. The asshole. Parker tried to get him back, but Seth never called him again.
“You should.” Anson grasped Parker’s hand. “But it makes this so much easier.”
“Me? I? What?” Oh Jesus, he had to stop talking. He made no sense and he could’ve sworn Anson wanted to kiss him.
“It’s rather difficult to ask someone out if they’ve already got a date or boyfriend.” Anson scooted he chair around the table until he sat next to Parker. “Right?”
“You’re asking me out?” He must’ve heard Anson wrong and understood the wrong vibes. “Really?”
“Of course…unless you don’t want to.” Anson trailed his fingers down the back of Parker’s neck. His eyes shimmered. “Not interested?”
“I…yes.” Christ. Start going for what you want, Parker. “I’d like a date. Yes. But I need some time. I mean—not tonight.” Shit. He was fucking up the plan. “I mean…”
“I’m pretty free. What works for you?”
“Uh…I need to get this paper down. But I’ve got time around lunch tomorrow. If I can get this turned in before tomorrow night, I’ll be free for Halloween. Would lunch work? Then if you don’t like me, we’re not committed to a night date?” He’d just talked himself out of a date. Shit.
“No good. I’m…in a class at lunch.” Anson draped his arm across the back of Parker’s chair. “I’m better at night.”
“Oh.” Anson didn’t strike him as a college student. “Which class? I could meet you at your building afterward.”
“Uh…it’s off campus at the sculpture building at the old farm.” Anson nodded. “You know, all of those power tools and bending machines. They can’t have it too close to campus in case one of the artists does something crazy.”
“I doubt that.” He turned in his seat to face Anson. “The worst you could do is burn down the building, but why? Performance art? Nah. You’re all careful. It’s a reason to be out there.” He wanted to touch Anson and prove to himself the man was real. He rested his forearms on his thighs instead. “I’ve never been to the arts building out there, so I wouldn’t know too much about it.”
“Oh? Why not?”
“No wheels.” Embarrassment washed over him. If his dorky personality wasn’t enough to push Anson away, his lack of a car would be the topper. “I had to sell my car to make my tuition payment. My job at the front desk at the student housing complex was cut.”
“That’s awful.” Anson didn’t pull away. He kept caressing Parker’s biceps.
“Unless I can find a sugar daddy or get some cash flowing from my writing, I’ll have to get a part time job over at the burger joint across from the student center. It’s not a bad job, but I’d rather be writing.” He smiled to hide how he felt—embarrassed, dejected, screwed over. He had to get more positivity into his life, but damn it. Life kept throwing him curveballs.
“You never told me what you write.” Anson wriggled his eyebrows. “Anything juicy?”
“No.” Here he wanted to be a writer and he hadn’t self-promoted. Bad Parker. “Science fiction with a little paranormal mixed in. It really depends on the day and my mood. I’ve got one about aliens invading the earth and this one is more paranormal.”
“Really?” Anson smiled.
Parker couldn’t read his expression. “You don’t like it? Too out there for you?”
“No, I’m fascinated.”
“You are?”

Posted by Wendi Zwaduk and Megan Slayer at 1:58 PM