It's a book blast for Angel Boy and there are prizes to be won. Like? Annalisa will be awarding a $25 Amazon or B/N GC to a randomly drawn winner via rafflecopter during the tour. You'll want to follow the tour and comment. Why? The more you comment, the better your chances of winning. The tour dates can be found here: http://goddessfishpromotions.blogspot.com/2016/10/book-blast-angel-boy-by-annalisa-russo.html
Angel Boy
by Annalisa Russo 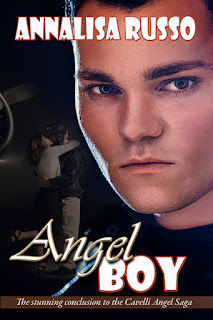 Seth Truitt, the boy who left her flat eight years ago. Now he’s back, sexier than she remembers, and needs her help. How can Meg accept Seth’s no-strings-attached deal in return for bringing a deranged predator to justice, when their steamy attraction to each other might very well get in the way?

Army Air Corps pilot Seth Truitt needs help to erase his dark-stained past, but soon realizes helping Meg Cavelli solve a dogged criminal case in return for salvaging his military career might be more dangerous than flying P-26 fighters for USAAC. But since Seth has no intention of letting Meg go again, he’ll stop at nothing to keep her safe from the twisted, unnatural threat they dubbed “the monster” as kids.

As the mystery unfolds, joining their minds and hearts might be the only way to stay alive.

Well, fan my brow. He was back.

Margaret Cavelli strode to the back door of her small house on Green Street and yanked the door open. Miraculously, she’d gotten out of Bellaluna before she ran smack dab into him. The moron hadn’t had the decency to call or write her in eight years and there he was. Just sashayed back all ginned up in his fancy uniform and thought that was A-Okay. Well, he had another think coming.

She slammed down the book on poisons on her tiny kitchen table, shrugged out of her woolen pea coat, and hung it on the hook next to the door. Luckily, she’d spotted Seth from her old bedroom window at Bellaluna when his taxi pulled up. She made sure he didn’t see her and then snuck down the old servants’ staircase to get to her Coupe while Gwen gave him the feed in the kitchen.

A free meal—and probably his old room back if she knew her father. All the hoo-ha for the prodigal son’s return? Uh-uh. He wouldn’t get squat from her. And if they tried to force her to be nice to him—she’d eighty-six that idea. He could take a powder—again—for all she cared. She wasn’t the forgiving type.

At least, not in this lifetime.

She grabbed the book of poisons and climbed the stairs to her home office and her murder board.

Annalisa Russo is a Midwest girl who grew up in an overpopulated first-generation Italian family in the burbs of Chicago, the

setting for her historical romance novels based in the 20th century. Her first series will be completed with the release of Angel Boy, the fourth book of The Cavelli Angel Saga. The series chronicles the lives of Italian immigrants in the 1920’s and 30’s. Along with a passion for reading and writing, Annalisa enjoys gardening, cooking for company, and frequently invents reasons for traveling. The mother of two grown children, she inherited a narcissistic tabby named Buster who really runs the show.

Thanks for hosting me today! And welcome to all your readers. I’m looking forward to chatting with everyone who stops by to take a look…my best to you, Annalisa.