I'm featuring an interview with my friend and fellow author, Lucy Felthouse (@cw1985) today on the blog. She's talking about the book she wrote with Victoria Blisse, another friend of mine, and some fun questions I decided to ask. Read on. There's a contest at the end!!

Describe yourself in three words.

Cast your book. Tell us who would play the main characters in a movie and why.

Henry Cavill would play Flynn Gifford. Why? Because he was my Muse for writing Flynn! As in, the bearded, mad-haired, vest-wearing, muscular Clark Kent version in Man of Steel. Yum.

I’m not sure who’d play Caroline Rogers. Let’s get Henry on board and see which hot blondes audition to play opposite him ;)

Ooh! I do love some Henry. Yeah, I can see him in that role. What’s your favorite love scene from a movie?

It’s not a movie, but there’s a scene in the TV show Supernatural where Sam has forbidden, taboo sex with the demon Ruby, and it’s super-hot. Of course, with hindsight, it’s probably because the actors were attracted to each other in real life (and are now married with kids!), but the tension and passion practically jumps out of the screen. Hawt!

Agreed. That was hawt! What’s your wildest fantasy?

Bwah ha ha! I’m not going to tell you that!

Hee hee! If you were to lose one of your senses, which would you rather lose and why?

My hearing. Noise drives me insane, so although I’m sure I would miss my hearing, I wouldn’t miss the annoying noises that piss me off on a daily basis.

What is the naughtiest thing you did as a kid?

I wasn’t that bad of a kid, really, I don’t think. Probably just the usual—sneaking around, going to places I wasn’t supposed to be, etc.

I wasn't really, either. Good to know I'm not alone. Now for the Quickies! They're fast and fun.
Boxers or Briefs?

Depends on the man.

*****
Weren't those fun? I thought so. Now for an excerpt of The Billionaire and the Wild Man: 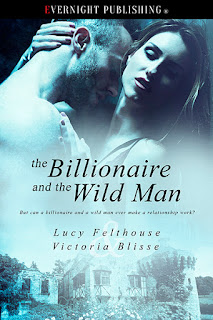 I duck back behind the curtain in an attempt to hide my surprise at what I just did. That and to secrete the budding erection I’m sporting. God, it’s been so long since I was with a woman in any way, shape, or form that a quick kiss has got my blood pumping and my hormones racing out of control. I’m like a puberty-wracked teenage boy.
The bathroom door closes, and I heave a sigh of relief. I need some time to think. Think about what just happened, and what’s going to happen next. I’ve implied that we’re going to continue where we left off, minus my beard, but is that what I really want? Is it what Carrie really wants? We’re both damaged souls. She’s fragile, and I haven’t had a meaningful relationship with anyone since … well, since Basra.
And that’s it. As soon as I think of Basra, of what happened there, and why, I make the decision that I’m not going to pursue anything with Carrie. It wouldn’t be right, not even if she was her normal self—a self which I suspect is a much stronger, more confident woman. I hope she’ll agree to just be friends, as it’s nice to have someone to talk to, beyond the perfunctory conversations I’ve had to secure me work so far in Hartington. She’s nice, and doesn’t seem to look down on me, even though she knows what lifestyle I lead. Not what I was expecting from a hot shot billionaire businesswoman.
I guess we’ve surprised each other.
Forcing my thoughts away from the eager press of her soft lips against mine, I lean out of the shower and dump the razor and foam in the sink, then move back under the spray and finish cleaning up. Then I twist the taps so cold water is beating down on my body. Letting out a gasp at the sudden chill, I quickly relish the way it takes the heat out of my hard-on. I’m soft again in no time, and I turn off the spray and step out of the tub, grabbing one of the towels Carrie left for me and having a quick rub down before securing it around my waist.
Then I use the other towel to wipe the steam from the mirror above the sink and set about shaving off my damn beard. It is seriously thick, and I wonder if one blade is going to cut it—literally. Luckily Carrie left the packet containing the other razors by the sink, so I’ve got multiple backups. I’ll just see how I go.
Giving the tin of foam a good shake, I squirt a liberal amount out and smear it over my face. Satisfied, I rinse the excess off my hands, pick up the razor and go to town. It takes several passes of the blade, getting closer to my skin each time, but eventually I have a bare patch. I half expect it to be much whiter than the upper part of my face, a tan line of sorts, but it doesn’t appear to be. Perhaps when I’m finished I’ll notice the difference. Not much I can do about it even if it’s the case.
By the time I’m done, I reckon I’m well over the ten minutes I mentioned to Carrie, but I’d massively underestimated the time it would take to rediscover my chin. Man probably found the North Pole more easily. Or the moon. And now I have had a shave, I’m painfully aware of how much I need a haircut. The general hairiness of earlier must have balanced me out, but now my dark curls look like they’re straying into afro territory. It’ll only get worse when my hair dries. I either need to get myself acquainted with a sharp pair of scissors or find a charity shop and purchase a woolly hat, which will hide a multitude of sins. Not to mention come in handy, as the end of summer is approaching, and with it, colder days and nights. I move that either/or task to the top of my mental to-do list and make do with raking my fingers through the unruly mop for now.

Here's a little bit about the book!
Flynn Gifford is enjoying a simple existence in a rural Derbyshire village when Caroline Rogers crashes into his life, barefoot and panicked.
Their lives could hardly be more different—she owns a successful luxury hotel chain, and he’s a penniless nomad who’s off the grid—yet neither can deny the attraction that burns between them. As Caroline reluctantly starts to open up to him, Flynn finds himself divulging some secrets of his own, secrets he thought he’d take to his grave.
But can a billionaire and a wild man ever make a relationship work, or will their secrets keep them apart?

Victoria Blisse:
Victoria Blisse is a Mother, Wife, Christian, Manchester United Fan and Award Winning Erotica Author and all round Cheeky Wench. She is also the editor of several Bigger Briefs collections, and the co-editor of the fabulous Smut Alfresco, Smut by the Sea (Vol.1), Smut by the Sea (Vol.2), Smut by the Sea (Vol.3), and Smut in the City Anthologies.
She is the mistress of Smut UK putting on Smut Events, Days & Evenings dedicated to erotica, socializing, fun and prizes. Check out Smut Nights, Smut by the Sea: Scarborough, and Smut Manchester for more info.
Born near Manchester, England, her northern English quirkiness shows through in all of her stories along with her own particular brand of humour and romance that bring laughs and warm fuzzies in equal measure.
Passion, love and laughter fill her works, just as they fill her busy life.
You can often find Victoria procrastinating on Facebook, Twitter and Pinterest.

GIVEAWAY!
Make sure to follow the whole tour—the more posts you visit throughout, the more chances you’ll get to enter the giveaway. The tour dates are here: http://www.writermarketing.co.uk/prpromotion/blog-tours/currently-on-tour/lucy-felthouse-victoria-blisse/