It's a blurb blitz for the books Breaking Hearts and Head Over Heels. Check it out! There are prizes up for grabs. Comment and take part in the rafflecopter below and you're good! What's up for grabs? The authors will be awarding a digital copy of both books to a randomly drawn winner via rafflecopter during the tour. Want more chances to win? Follow the tour!! You can do that right here: http://goddessfishpromotions.blogspot.com/2016/07/blurb-blitz-lyrical-press-contemporary.html

Sometimes it takes hurt to open your heart…,

At twenty-two, Thane Wells is the highest-paid pitcher in Major League Baseball—and he

owes it all to his adoptive Mama, “Queen” Elizabeth Sommerville, a wise, beautiful, entrepreneurial African-American woman who always encouraged him and his two white brothers to reach for the stars…the woman Thane still talks to daily. He never dreamed their most recent conversation would be their last. With his beloved supporter suddenly gone, Thane is grief-stricken, shaken, and vulnerable—especially to a woman like Kari Meyers.

Kari’s had her eye on Thane for a while, but strictly for business. As a junior sports agent, she’s hungry to sign him, especially when she hears his current agent will be retiring soon. When she finally locates Thane, she’s shocked to discover he’s attending his mother’s funeral—and he’s shocked to find Kari in his hotel room. Assuming she’s an escort is just the beginning of their misunderstandings. But one thing that’s clear is their mutual attraction. As a single mom with an NBA ex, Kari has a rule against dating athletes. Yet as circumstances bring the two closer together, they just might find they’re on the same team, heart and soul…

Here's an excerpt for Head Over Heels:

She turned, hoping to see Thane calling for her. Instead, she saw the other businessman who had been sitting with Alec Fogel. Out of curiosity, she waited as he walked up to her.

“Do I know you?” Kari asked as she held on to the strap of her purse.

“No. And I don’t know you, but I’d like to.” The statuesque older man ran his hand over his silver hair. “My name is Frank Milliner. I’m the owner of the Winning Edge Agency. I heard what you said in there to Thane Wells. What agency do you work at now?”

Kari regarded him for a moment before speaking. “I don’t. I was hoping to sign him up as my client.”

“Wait. You don’t work at an agency? How did you even know about him?”

Great. Another man who probably underestimated her passion for sports and her drive for a career. She would have to correct that perception right now.

“I could use someone like you in my company. I’m assuming you’ve finished school.” Frank crossed his arms over his chest as he studied her.

He laughed and shook his head. “Yes, you are exactly what I need for my business. We should talk.” He tried to guide her back into the hotel.

Kari stayed cemented to the cracked walkway. “I’m not exactly welcome back in there. Can we meet somewhere else?”

Although she’d missed one opportunity, she hoped this one would turn out to be a winner. That didn’t mean she would be giving up on Thane Wells. He wouldn’t be the one who got away.

Crystal Bright graduated with a B.A. from Old Dominion University with a major in Creative 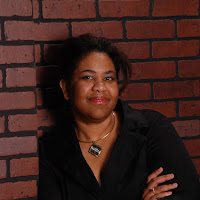 Writing, a minor in Communications, and an emphasis on Public Relations. She earned her M.A. from Seton Hill University in Writing Popular Fiction. She is a member of Romance Writers of America and Chesapeake Romance Writers. For more information about Crystal and her writing, please visit her website at CrystalBrightWriter.com. Follow her on twitter:twitter.com/CrystalBBright.

Can tragedies have a happy ending in Storybook Lake?

Every town has one—a mean girl, hell-bent on taking down everything in her path—and Danielle Ranier played the role to a tee. She broke up Storybook Lake’s most beloved couple and to save herself from a lifetime of lectures on morality, she hopped on the first plane out of town. Six years, one child, and a big secret later, she’s back, fleeing from her abusive husband, who isn’t quite willing to set her free. Now on trial for a murder she didn’t commit, Simon Hunter, the only man she’s ever loved is offering her a lifetime of love and security. If she could only reveal the secrets long-held inside her, a family that never was might finally come together . . .

Here's an excerpt of Breaking Hearts:

How it all started.

Since the moment I first noticed boys in fifth grade, Simon Hunter was the boy I saw myself growing old with. He had the best smile, the most expressive honey-colored eyes, and a way with people that made an entire town love him. Even when he didn’t know it, he was everything to me. Any minute I could sneak into his presence was a minute I savored and cherished.

When we got around to the business of being adults, our schedules seldom coordinated, but we spent most Fridays together. I’d skipped out on the last three, wanting him to see what it would be like without me. I wanted him to miss me with a desperate passion.

The missing only happened on my end, and I had the phone log to prove it. As it went to voice mail, I glared at my phone and left my tenth message…a pitiful, I-miss-you-please-call-me-and-let-me-know-you’re-okay kind of message. Since high school, he’d been my reason for waking up in the morning, the hero in the dreams I had every night, and the focus of all the moments in between. And damn it. Friday was our day.

After a quick makeup check, I left my apartment, the one we’d planned to share up until a few months ago when he started making all those trips to LA with Gatlin. I kicked the jealousy away with the toe of my shoe against a rock on the sidewalk.

For three full blocks, I took my frustration out on chunks of concrete until I strolled past the bakery. It took every ounce of my will not to press my nose against the window to see if he’d decided to loiter inside while his sister worked, or if he’d just run in to get some free pastries. His car was parked out front, so I leaned against it for a few minutes, waiting…remembering the first time he kissed me…the way his hand cupped the side of my face, the brush of his lips so softly over mine. Had we been sixteen? Seventeen? It was a lifetime ago.

As an author, Melissa Shirley believes in fairytales, happily ever after, and destiny. Born and raised in Illinois, and a mother of eight, she lives with her husband and three youngest children in a quiet town in the southern part of the state where she spends her time writing and watching her children grow into the people she has always dreamed.


http://www.barnesandnoble.com/w/breaking-hearts-melissa-shirley/1123129790
a Rafflecopter giveaway
Posted by Wendi Zwaduk and Megan Slayer at 12:00 AM