Book Blast ~ When a Marquis Chooses a Bride by Ella Quinn

It's a book tour and I'm featuring When a Marquis Chooses a Bride by Ella Quinn. You'll want to keep reading. Not only is this a fantastic book, but there are prizes for participation. Like? Ella will be awarding a Signed ARC of When A Marquis Chooses a Bride (US ONLY) to 5 randomly drawn winners via rafflecopter during the tour. How cool is that? Want more chances to win? Then follow the tour. You can do that here: http://goddessfishpromotions.blogspot.com/2016/08/book-blast-when-marquis-chooses-bride.html

When a Marquis Chooses a Bride
by Ella Quinn

Thanks to their large extended family and unconventional courtship, the Worthingtons have seen their 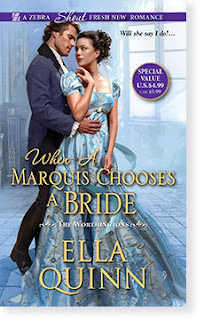 share of scandal and excitement. But nothing has prepared them for this...

The Dowager Lady Worthington isn’t quite sure what to make of country-girl Dorothea Stern. As the granddaughter of the Duke of Bristol, Dotty is schooled in the ways and means of the nobility. But her sharp wit and outspoken nature has everyone in a tizzy. Especially their cousin, Dominic, the Marquis of Merton.

Prematurely stuffy, Dom was raised by his cheerless uncle to be wary of a host of things, including innovation, waltzing, and most perilous of all: true love. Still, there’s something about Dotty, beyond her beauty, that Dom cannot resist. But the odds are against him if he intends to win her as his bride. Will he choose loyalty to his family—or risk everything for the one woman he believes is his perfect match…

Want an Excerpt? Here you go!

“Kimbal,” Dom called to his valet.

“I shall be dining at White’s.”

Dom scribbled a note to his friend Viscount Fotherby asking if he would like to join Dom for dinner. By the time he was dressed and had donned his hat, Fotherby’s answer affirming the invitation had arrived.

A short while later, just as a light sprinkle turned into a persistent rain, Dom handed his hat and cane to the footman at White’s and found his friend lounging in the room that held the club’s famous betting book. William Alvanley, another of Dom’s friends, was seated next to the window with another man staring intently at the rain.

He turned to Fotherby. “What are they doing?”

“Five thousand quid on which raindrop will reach the bottom of the sill first.”

Despite being close with many of the Prince Regent’s circle, Dom could not abide the excessive wagers his friends made. Alvanley would end up ruining himself and his estates at the rate he was going. “Are you ready to dine, or are you waiting the outcome?”

“Famished.” Fotherby tossed off his glass of wine. “Thought you weren’t coming to Town this year.”

“My plans changed.” Dom and Fotherby entered the dining room. “I have decided to take a wife.”

“Wife?” Fotherby choked. “Any idea who?”

“Not yet, but I have a list of qualifications. She must be well-bred, not given to fits of temper or strange starts, quiet, biddable, easy to look at—I must get an heir on her after all—know what is expected of a marchioness. And not prone to scandals. You know how my uncle hated them. I think that about covers it.”

“A paragon, in other words.”

Dom gave a cut nod. “Indeed. I could wed no one less.”

side. Reading historical romances, especially Regencies, were her escape. Eventually her love of historical novels led her to start writing them. She has just finished her first series, The Marriage Game, and her new series, The Worthingtons, began in April 2016.

She is married to her wonderful husband of over thirty years. They have a son and two beautiful granddaughters, and a dog. After living in the South Pacific, Central America, North Africa, England and Europe, she and her husband decided to make their dreams come true and are now living on a sailboat cruising the Caribbean and North America. Europe is next!
Website: www.ellaquinnauthor.com
Facebook: www.facebook.com/EllaQuinnAuthor
Twitter www.twitter.com/ellaquinnauthor
Blog http://ellaquinnauthor.wordpresscom


Enter to win 1 of 5 autographed ARCs - a Rafflecopter giveaway
Posted by Wendi Zwaduk and Megan Slayer at 12:00 AM