It's a book blast and you'll want to check it out. For what book? Fighting Blind by CM Seabrook. Go forth and comment! Why? There are prizes up for grabs. Like? The author will be awarding a $25 Amazon or B/N GC to a randomly drawn winner via rafflecopter during the tour. How cool is that? Want more chances to win? Then follow the tour here: http://goddessfishpromotions.blogspot.com/2016/07/book-blast-fighting-blind-by-cm-seabrook.html

Mackenzie Brooks is everything I've ever wanted. 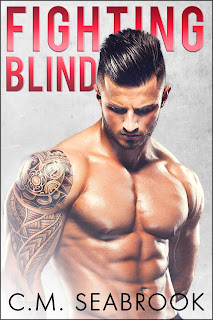 Three years ago, she walked out of my life. No explanation. Just gone.

With the biggest fight of my career only weeks away, she walked back in.

I'll do anything to protect her. Destroy anyone who tries to hurt her. When it comes to Mac, there isn't a line I won't cross.

I've loved her my entire life, and now that's she's back I won't let her go.

She refuses to speak about the past, or the secrets I know she's hiding.

I know she's planning on running again. But when you love someone, you stay and fight. Even if you're fighting blind.

How about an Excerpt? Sure!! Here you go:

Her hands snake around my back and she rests her forehead against my chest. I pull her tight, reveling in the warmth of her body. My muscles tense in awareness of how perfectly she fits against me.

I breathe in her scent, not wanting the moment to pass. “Let me fix this.”

“You don’t even know what I’ve done.” Her voice is muffled against my chest. “If you knew, you wouldn’t…I can’t do this.”

“Whatever it is, it’s in the past. Come home with me and we’ll figure things out.”

She shakes her head against my chest and mumbles incoherently. When she pulls back, there are tears running down her cheeks and her eyes are red. I know before she says the words that she’s going to run again. Whatever she’s hiding, it’s obvious she doesn’t trust me.

A cold chill wraps around me when she drops her hands and takes a step backwards.

“Mac.” Her name comes out as a rough plea, and I see her flinch.

“Don’t come back,” she whispers, before disappearing through the shelter’s doors.

Like hell I won’t. Losing her once nearly destroyed me. I won’t lose her again.

C.M. Seabrook is the author of the Amazon bestselling fantasy romance Cara's Twelve, as well as the Therian Agents paranormal romance series, and co-author of the Mated by

When she isn't reading or writing sexy stories, she's most likely spending time with her family, cooking, singing, or racing between soccer, hockey and karate practices. She's living her own happily ever after with her husband of fifteen years and their two daughters.

She loves creating new exciting characters - from sexy, bad boy alphas, to the passionate, fiery women who love them.

Canadian born and bred, she started life in Edmonton, Alberta, and now resides in London, Ontario. She attended Western University where she graduated with an Honors degree in Anthropology.

Her guilty pleasures include red wine, pasta, binge watching Starz originals, and hanging out with her rescue pup, Jaxx.

She loves to hear from her readers and can be reached at cm.seabrook.books@gmail.com

Thank you for sharing! 💖