It's an excerpt tour and Walker Bride is being featured! Check it out! Want to win a prize? Comment. What's up for grabs? Bernadette will be awarding autographed copies of all three Walker series books (US ONLY) to a randomly drawn winner, and one e-Copy of one of the author's backlist to another randomly drawn winner; both via rafflecopter during the tour. How cool is that? Want more chances to win? Then follow the tour. You can do that here: http://goddessfishpromotions.blogspot.com/2016/01/excerpt-tour-walker-bride-by-bernadette.html 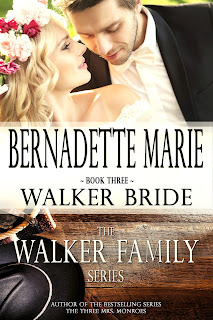 Pearl Walker's life until she put her hands on Tyson Morgan while measuring him for a tux.

Tyson was happy being a miserable man, taking care of his family's land, and not involved with a woman. However, even he can't resist the pull of attraction to the beautiful, and off limits, Pearl?

The feud between the Walkers and the Morgans had torn apart friends and families for generations. What might happen when Pearl Walker and Tyson Morgan become business partners—and more?

Her intentions on bringing Tyson to the bar had been to ease him into something—anything. Her blood had been pumping since Tyson walked through the door of her store. What she hadn’t anticipated was diving into family history or it upsetting her as much as it did.

She was no prude. She understood relationships and sex. Greed fueled her too. That’s why she was so successful. What she didn’t understand was a man who would move from woman to woman and family to family as if it were okay. Why would he think it was okay to gamble away their savings over and over and then try and take away what his father and his brother worked so hard to grow?

The waitress set her beer on the counter, and she picked it up with shaking hands.

The afternoon was going to be a waste now. Tyson Morgan was going to finish his drink and get out of there as fast as he could. Why wouldn’t he? Crazy Walker women were not a prize anyone wanted to win.

She could feel the first two beers swimming in her head as she walked to the table. The glass sloshed over the side a bit as she set it down.

“Fine,” she said as she picked up the glass.

“How are you getting home?”

Tyson’s lips pursed. “Yep, but I’m not thinking you should drive it.”

“I wasn’t going to. I’ll go back to my store and stay there for awhile. I’m not stupid. I won’t drink and then drive. I won’t even text.”

He actually laughed at that. “I didn’t mean to get you all worked up over your dad.”

She set her glass down and leaned in over the table. “Are you attracted to me?”

His eyes widened, and his face went pale. “Of course. You’re a very beautiful woman.”

He finished his beer and let out a long breath. “Don’t need one.”

Bernadette Marie has been an avid writer since the early age of 13, when she’d fill notebook

after notebook with stories that she’d share with her friends.  Her journey into novel writing started the summer before eighth grade when her father gave her an old typewriter.  At all times of the day and night you would find her on the back porch penning her first work, which she would continue to write for the next 22 years.

In 2007 – after marriage, filling her chronic entrepreneurial needs, and having five children – Bernadette began to write seriously with the goal of being published.  That year she wrote 12 books.  In 2009  she was contracted for her first trilogy and the published author was born.  In 2011 she (being the entrepreneur that she is) opened her own publishing house, 5 Prince Publishing, and has released contemporary titles and has begun the process of taking on other authors in other genres.

Bernadette spends most of her free time driving her kids to their many events.  She is also an accomplished martial artist, working her way to her second degree black belt in Tang Soo Do.  An avid reader she loves to meet readers who enjoy reading contemporary romances and she always promises Happily Ever After.

Thank you for hosting me today! :)