Blurb Blitz Tour ~ Once in a Lifetime by Jayne Nichols

It's a Blurt Blitz tour and the book up is Once in a Lifetime by Jayne Nichols. Very cool, huh? I think so. Looks good. Oh and you'll want to comment. Why? Jayne Nichols will be awarding a $50 Amazon or Barnes and Noble GC to a randomly drawn winner via rafflecopter during the tour. Want more chances to win? Want to follow the tour? Follow it here: http://www.goddessfishpromotions.blogspot.com/2016/01/blitz-blurb-once-in-lifetime-by-jayne.html

Once in a Lifetime
by Jayne Nichols

Is it possible for a poor hash-house waitress to find love with a wealthy Irish horse breeder? 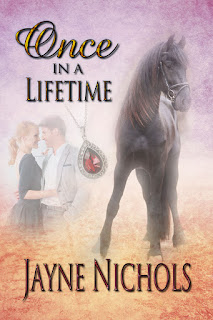 Not as long as he thinks she conned his father into leaving her his cottage on the island of Inish Mor in the Aran Islands.  To prove his assumption false, Samantha St. John sells her new inheritance to Kieran McDade for one Euro, receives his thank-you kiss on her cheek, and bids him farewell.

Never expecting to see him again, she is surprised to receive his invitation and a plane ticket to Ireland.  He’s had second thoughts and offers Samantha a holiday at his home on FastTrack Farm where she charms not only his race horse, but Kieran himself.  For Samantha, it is like a fairy tale, complete with a wicked witch, an elegant ball, and a horse race that could decide whether her Cinderella story will have a happy ending.

Samantha perched on a stool, watching Tim Daly build two glasses of Guinness.  Though the earlier rush had waned with most of the tourists moving on to other venues, others had come in to take their places.  More of the locals would drift in and out until the bar closed at midnight.  She sighed.  Tim set a pint in front of her.  She’d never tasted the dark stout that was Ireland’s stock in
trade.  She sipped tentatively, then with greater gusto as her thirst took over.

Kieran touched her arm.  “Slow down, Samantha.  That’s not a Coke.”

“It’s better.”  She wolfed down the stew with equal enthusiasm.

“Sláinte.”  Tim smiled, clicked his glass with hers.  “I like to see a woman who knows how to eat and drink.  Where are you from, lass?”

“Texas.”  It was easier and more well known than Minnesota.  And of course, with her accent, more believable.

“Ach.  Where they drink whiskey and have shootouts in the streets?”  He raised both hands, thumb and forefinger in pistol position.

“The whiskey part at least.  Shootouts are mostly in the movies.”  Except for the real-life one involving her father’s death.  She glanced at Kieran, grateful for the reassuring touch of his hand.  She finished the pint.  “Could I have another one?”

While Tim built another Guinness, Paddy strolled over and stopped between them.  He faced Kieran, clapped a hand on his shoulder.  “Will you sing with us, lad?”  Paddy didn’t see the color drain from Kieran’s face, but Samantha did.  Paddy turned toward her.  “When our Kieran here was just a wee lad, he could bring the house to tears, his voice was so grand.”

Kieran took a quick swallow from his glass.  “That was a long time ago.”

He was trying to think of a graceful way out, she could see it in his eyes.  It’s not always easy to face our fears.  “I’d love to hear you,” she said softly, touching his hand.  “Please.”

“Only for you,” he whispered in her ear, then set the glass aside and slid off his stool.  “But I want something in return.”  His eyes drilled into hers so intensely, she was afraid to ask what that could be.  Would he want sex for a song?  He smiled as he stepped behind the bar, bent down and reappeared seconds later with the sketchbook from her purse.  “Draw me.”

Growing up, I wrote a few things for school—reports and a few creative writing projects for

English class—but never really thought about writing novels until after I married my David.  Even then, what little writing I did leaned toward Mystery.  I didn’t discover Romance until my husband and I traveled to Greece.  It was hot—I mean really hot—and we ducked inside the Athens Hilton to bask in their air conditioned gift shop.  I was looking at a rack of paperback books and picked up one entitled Born in Fire by someone named Sarah Hardesty.  I stayed in our air-conditioned hotel room for two days reading that novel nearly non-stop and decided then and there what I wanted to do for the rest of my life.  I wanted to write Romance.  It wasn’t until I was back home and hunting through a Barnes and Noble for more books by Sarah Hardesty that I learned the author was actually Nora Roberts.  Truthfully, I had never heard of her.  I know who she is now.  And who knows, maybe someday, she will have heard of me.

As Jayne Nichols, I write contemporary romance (Wish Fulfilled Series) and romantic suspense (Madrona Point Series), and I love every minute of it.

Buy Links for ONCE IN A LIFETIME


a Rafflecopter giveaway
Posted by Wendi Zwaduk and Megan Slayer at 6:47 AM

Thanks for sharing and for the giveaway

Thank you so much, Wendi, for hosting me. Jayne

Thank you, Trix. Me, too. Jayne

Hello, Morgan, I just now see your comment. I'm glad you could stop by. Jayne

Great excerpt, sounds like a wonderful book, thanks for sharing!

I love the cover! Did you have any trouble picking one out or did you know it was perfect when you saw it? :)

Thank you, Eva. Good luck in the drawing. Jayne

What is your favorite genre?

Victoria, my cover artist will be thrilled. As am I. I gave her the idea - horse necklace, and character bios. This was try #2, and I loved it. Jayne

Well, Becky, to be perfectly honest, I like to read a good romantic suspense. And write them, too. I will have two out later this year. Jayne

Thank you for dropping in, Mary. I'm trying. It's a hanger-oner! Jayne

I enjoyed the excerpt Thanks for sharing

I am really enjoying following this tour, thank you!