It's a book blast and there are prizes for you! Check out Kiss of a Stranger by Lily Danes and Eve Kincaid. What's up for grabs? The authors will be awarding a $20 Amazon or B/N GC to a randomly drawn winner via rafflecopter during the tour. How cool is that? Want more chances to win? Follow the tour here: http://goddessfishpromotions.blogspot.com/2016/01/book-blast-kiss-of-stranger-by-lily.html

Kiss of a Stranger
by Lily Danes & Eve L Kincaid
~~~~~~~~~~~~~
Maddie Palmer lost everything when her ex-husband betrayed her. Years later, she’s rebuilt her life. It’s safe and stable—everything she thought she wanted. Until a dangerously sexy ex-con appears in Lost Coast Harbor...

Gabriel Reyes just did six years behind bars for a crime he didn’t commit. Now he’s returned, determined to expose the men who set him up. His best chance at redemption is seducing the straight-laced woman working for the enemy…until he realizes he’s the one being seduced.

As passion ignites, Gabe and Maddie find themselves drawn deeper into the corruption behind the 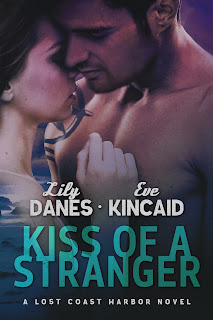 town’s richest family… even while facing the greatest danger of all—losing their hearts.

Gabe walked straight to the corner and ran his fingers across the leaves of a ficus, his eyes almost soft.

He moved around the room, studying each plant, touching a few others with gentle fingers. “It’s like a jungle in here.” Gabe’s hand hovered near the orchids she kept on the mantel, but he resisted the urge to stroke the temperamental plant. “They’re all real, too.”

“Of course they are,” Maddie said, indignant. She might not be able to keep a relationship alive, but plants were another matter. They thrived under her care.

She wasn’t prepared for his expression when he turned to her. He looked…grateful?

“You don’t realize all the things you miss.” It didn’t seem like he was talking to her.

“Not a lot of plants in prison, huh?” She fought a shudder at the thought. Life without a bit of dirt and a few seeds sounded so sterile, though her rational mind knew it was nothing compared to the other things prison took from him.

“Not a lot of all sorts of things.” He shook off the melancholy, and she could practically see his inner devil return. Gabe’s eyes raked her, a smile tugging at his lips. “This isn’t the home I expected from a straight-laced professional woman.”

His laugh was unexpected. “I don’t think I’ve sat in a new piece of furniture in my life. No, I mean this.” His gesture took in everything, from her plants to her clothes to the afghan spread across her sofa. “Are you secretly a softie, Maddie?”

She glowered, and he laughed. “Don’t worry. I’ll keep your secret,” Gabe assured her.

LINKS:  https://www.goodreads.com/book/show/28183199-kiss-of-a-stranger
a Rafflecopter giveaway
Posted by Wendi Zwaduk and Megan Slayer at 12:00 AM

Thank you for hosting us!