Check it out. It's a Masquerade and there are prizes for you! Comment and enter via rafflecopter below and you could win a $15 GC to either Amazon or BN. Follow the tour here and here we go!!

Summer, 1976. Luz de Rueda returns to her beloved Spain and takes a job as the biographer of a 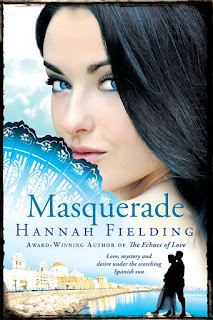 famous artist. On her first day back in Cadiz, she encounters a bewitching, passionate young gypsy, Leandro, who immediately captures her heart, even though relationships with his kind are taboo.

Haunted by this forbidden love, she meets her new employer, the sophisticated Andres de Calderon. Reserved yet darkly compelling, he is totally different to Leandro – but almost the gypsy’s double. Both men stir unfamiliar and exciting feelings in Luz, although mystery and danger surround them in ways she has still to discover.

Luz must decide what she truly desires as glistening Cadiz, with its enigmatic moon and whispering turquoise shores, seeps back into her blood. Why is she so drawn to the wild and magical sea gypsies? What is behind the old fortune-teller’s sinister warnings about ‘Gemini’? Through this maze of secrets and lies, will Luz finally find her happiness … or her ruin?

And now an excerpt...
For a moment they stared at each other. He was clearly a gitano, one of those people that Luz’s family had always warned her to steer clear of. The frayed, cut-down denims sat low on his hips, revealing deeply tanned, muscular long legs, and his feet were bare as though he had just walked straight from the beach. Unruly chestnut hair, bleached golden in parts by the sun, tumbled to his shoulders; his smooth copper skin glowed more than that of any gypsy she had ever seen. As she allowed her gaze to flick back to his face, Luz caught the flash of amused, provocative arrogance in those bright, burning eyes, mixed with something deeper that she didn’t understand. She swallowed. The overwhelming masculinity of the gitano unsettled her. Luz lifted her chin resolutely, but felt the pull of his magnetism reaching out and gripping her, beguiling and dangerous, so that instinctively she nudged her mount and they broke into a smooth canter. The thumping of her heart sounded loud in her ears. She could sense his eyes on her, as a palpable touch, even as she rode away, trembling, and the feeling remained with her until she knew she was out of sight.

About the author...
Hannah Fielding is an incurable romantic. The seeds for her writing career were sown in early 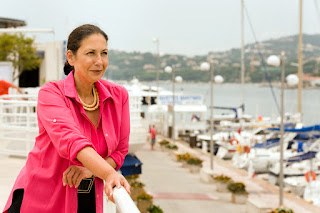 childhood, spent in Egypt, when she came to an agreement with her governess Zula: for each fairy story Zula told, Hannah would invent and relate one of her own. Years later – following a degree in French literature, several years of travelling in Europe, falling in love with an Englishman, the arrival of two beautiful children and a career in property development – Hannah decided after so many years of yearning to write that the time was now. Today, she lives the dream: writing full time at her homes in Kent, England, and the South of France, where she dreams up romances overlooking breath-taking views of the Mediterranean.

Thank you very much for featuring my book blast. I’m really excited about this new release because I think it’s my most smouldering yet, and I love the Spanish setting. Have you been to Spain?

If you're searching for the ultimate Bitcoin exchange company, then you should choose YoBit.