Shadows Across the Liffey with Cathy Mansell


I had already written my second book, Her Father’s Daughter when the idea
came to write Shadow Across the Liffey. The title came half way through
the writing and only after a lot of deliberating. 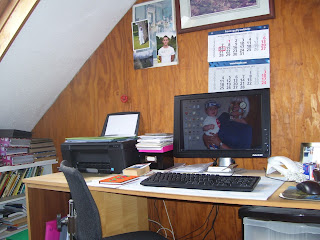 Shadow Across the Liffey closely explores my affinities with Dublin and Leicester, two cities that are close to my heart. Therefore, I felt compelled
to set the book in both cities because Dublin, is the land of my birth and Leicester is where I emigrated to 50 years ago. I now reside in rural Leicestershire in the lovely village of Ashby Magna with my  husband and family, surrounded by farm animals and fields.

A small part of the story is borne out of my own early experience of widowhood, alongside the trials of bringing up a family as a lone parent in the 70’s. The loneliness that comes with it, and then finding love again as Oona does, with my husband Dennis, of 37 years and my most ardent supporter.

Other characters, such as Sean, Oona’s son, and villain, Vinnie Kelly are completely fictitious, and strangely enough, the two characters I enjoyed writing about most.

• Describe your writing space –I love my garret. It’s where I feel most creative. When my husband retired as a architect, he lined the walls,fitted a carpet and put in a velux window and he said “This is going to be my studio” He furnished it with a desk and a drawing board.

But, I’m glad to say that my passion to write was greater than his desire to draw, so the garret became mine. And I’ve made it my own for the past 15 years.

The best thing is, that I don’t get too many interuptions because no one likes climbing the access ladder. It also keeps the smaller grandchildren downstairs but not so, the older ones who love to clamber up to see what Nan is doing.

There is a wonderful view from the window overlooking our long garden and the fields beyond where sheep are usually grazing. Lovely in summer and pretty in winter when snow has fallen covering the trees and
fields. 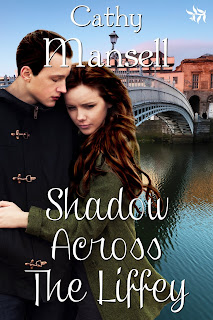 SHADOW ACROSS THE LIFFEY
Cathy Mansell


Sergeant McNally would never forget the pink icing sugar. It was the worst accident he had witnessed in the twenty years since he first joined the Gardá Síochaná. If his doctor hadn’t suggested walking as a healthy exercise, he would have taken the car and avoided Dock Road that day.
Most collisions just happen; usually during bad weather, when cars slide into one another. That wasn’t the case here. It was dry, with a clear sky – ideal for a brisk walk. This was no accident. It appeared to him that the driver of the van, travelling from the docks at speed on the wrong side of the road, was intent on killing himself and anyone else he could take with him.
The van hit the black Morris Minor, the force sending the car spinning out of control into the path of oncoming traffic. Then all McNally could hear was the sound of crunching metal as the car collided with other vehicles causing a pile-up. The van overturned several times, while the car ended up on its side.
‘Good God!’ He was stunned at the magnitude of the scene as it unfolded before his eyes. Children cried; people screamed out for help.
***
McNally acted as fast as he could, alerting the ambulance services and relaying news of the crash to his colleagues at the station.
An eerie silence descended. Eyewitnesses looked at the pile-up in horror, and the Dublin street came to a standstill. Car doors opened and those uninjured scrambled out. Some, bleeding from cuts and bruises, stood around in a daze.
‘Help’s on its way!’ McNally shouted.
‘Over here!’ a man cried. ‘The van driver’s dead. Can someone check for injuries in the other cars?’
‘I’m a doctor!’ someone else called. ‘This one’s bad. The man at the wheel is dead.’
McNally climbed on top of what had once been a Morris Minor, but which now resembled a mound of compressed metal, and peered inside. Pink icing sugar splattered the shattered windscreen. ‘God Almighty!’ he cried. ‘There’s a child trapped in the back. I can see a tiny hand. Glory be to God!’


***
Oona and her sister laughed as they blew up coloured balloons for Jacqueline’s fifth birthday party, placing them prettily around the room.
‘This is hard work.’ Sighing, Oona hooked her long dark hair behind her ears. ‘I wish I’d asked Eamon to do all this and gone to fetch the birthday cake myself.’
‘Oh, yes. Can you see our men making fairy cakes and arranging a table as pretty as this one?’ Connie was perched at the top of the stepladder, tying pink balloons around the lampshade above the party table.
‘Give over!’ Oona handed her another balloon. ‘Eamon wouldn’t have a clue how to bake a cake.’
Oona Quinn was twenty-six, two years younger than her sister, and as dark as Connie was fair. A petite five feet two inches, with dark brown eyes and small slender hands, she worked part-time in a shipping office. Her husband had wanted her to be a stay-at-home mum, but she had won him round by telling him that it gave her a sense of importance to be contributing to the family income.
‘Have you tried Mam’s new teacake recipe yet?’ Connie asked.
‘Is it good?’
‘Well, Dessie loves it. You soak the fruit overnight in cold tea. I’ll bring you some over next time I bake one.’
‘All this talk of food’s making me hungry.’ Oona clutched her stomach. ‘Let’s have a cup of tea and then we can finish blowing up the rest of the balloons.’
‘I’d love a cup.’ Connie stepped down from the ladder and followed her into the kitchen. ‘Eamon’s done a grand job on the extension.’ She glanced around at the spacious kitchen with new Formica work surfaces and red cupboards.
Connie, a hairdresser, had been married to Dessie Flanagan for ten years, but they had no family. It made Oona realise how lucky she was to have two healthy children.
‘It’s made such a difference. Although it has taken up most of the back garden, I’d rather have the space inside. More room for the kids.’ Marriage and children were all Oona had ever dreamt of, and after two years of being a single mother and all the heartache that came with it, she had married Eamon. He earned a good wage working for the Dublin Gas Company and, since the birth of Jacqueline five years ago, she’d felt complete. 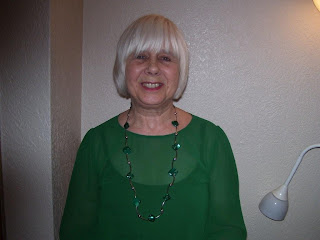 Cathy is an experienced writer of romantic fiction. Her early work was
competition short stories and articles published in national magazines. She was
Editor in Chief of the Leicestershire Anthology, ‘Taking Off’, a book promoted
and supported by Arts Council UK.

In recent times, Cathy has turned to writing full-length novels that are set in
Ireland/England. Her debut book Shadow Across the Liffey was published on
7th February 2013 by Tirgearr Publishing. She was a recent contestant on the
TV show Food Glorious Food to be broadcast on 27th February 2013

Thanks, Wendi, for hosting our Cathy. Shadow Across the Liffey is a fabulous story. We hope your readers think so too.

I hope they do too. I'd love to reach the Irish Americans. They
must be out there somewhere.