Monday Moans and A Shout Out!!

Come check it out! I'm stomping the pavement for Megan because this is her first ever release this week. She's also the Featured Author over at Whipped Cream this week. You could win a Gift Card for Free Books so comment this week!!!! 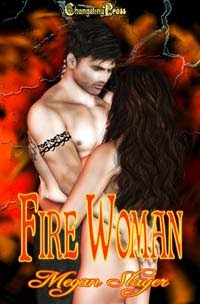 
She’s everything he needs… if he can withstand the burn.

Atria Moline isn’t your average photographer. She controls fire. Sounds fun, being able to scorch whenever you like? Think again. She’s lonely and desperate for the touch of the man who can dance in her flame -- if she doesn’t immolate him first.


Zac “Iceman” Frost controls the stage with his band Glow. He’s not about to back down from Atria’s challenge. He’s got secrets of his own and his sights set on her.

“Whatever, brat. Are you here to see Lucien?” His smile widened. “Or have you finally found the nerve to talk to Zac?”

“Shut up.” The response sounded one hell of a lot better than, I want to jump his bones and ride to Arizona. Damn it. “Luc wanted pictures taken after the gig. I’m here to photograph, not hurl myself at anyone.” Shit. That sounded goofy, especially since she didn’t have her camera in plain sight. The thought crossed her mind -- had she remembered it at all?

“Uh-huh.” He twisted the knob and allowed her into the inner sanctum -- the backstage area. “Next time, keep the camera around your neck for credibility.”

Although Atria considered giving her brother the middle finger, she refrained and shivered. She’d been backstage at the Steelyards plenty of times. Luc and his band, Glow, played lots of places, plenty of them creepier than the former factory warehouse. Why the hell did the massive room scare her? One name came to mind. Zac.

She plopped down onto a nearby folding chair and closed her eyes. Zacchaeus “Iceman” Frost. Goofy name for a hot man. Hot? Okay, so the guy was handsome in a brooding, six-foot-five manner. She licked her lips as a clear image of Zac came together in her mind. Muscles just where a woman wanted to lick. Hardly a stitch of hair on him and a just one tattoo on his back -- a spider web or medieval design… she wasn’t sure and didn’t care. And those eyes, the pristine blue of the North Atlantic. Heat zipped through her veins. Was he packing? The bulge in the front of his leathers hinted at more than enough to please. Need tingled in her pussy, and Atria crossed her legs to stave off the sensations.

“I want you, Attie.” His sensual lips curled into a smile. “Now.”

Her breath came in labored puffs as she opened to him. Just to feel his callused hands on her body, tweaking her nipples, drawing out her fire and scorching them through and through.

“What are you doing?”

Posted by Wendi Zwaduk and Megan Slayer at 10:05 AM