Jaxx Steele comes by tomorrow with his new book, Care Package. Want to know more? Sure you do. Want to win prizes? I sure do. Here's what you could win: a promotional t-shirt, ink pen and key chain to one randomly drawn commenter!

Here's the blurb for Care Package as a teaser for tomorrow:
First Sergeant Dwayne Roman was asked to leave his life as a soldier. After suffering three years with regret and loneliness, he had the chance to get back what an unjust law and self-serving people took from him. 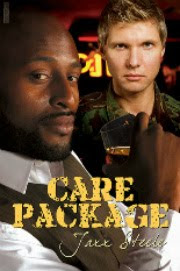 Want an Excerpt of Care Package? Here ya go!

"It is my duty as your commanding officer to--"

Roman's mouth snapped shut. The passion in the other man's outburst stopped him in his tracks. The pain his words inflicted was evident on his face. That had not been his intention. All he wanted to do was make sure that they had a future where they were, and some sacrifices had to be made to ensure that.

"Private, you are dangerously close to being insubordinate with your tone."

Styles held the bridge of his nose as he took several deep breaths and blinked away obvious tears. Leaning forward, holding the chair for balance, his gaze was intense and his words were slow and deliberate.

"I want you to tell me that you don't want me. That you think it is best for us to be apart. Give me the order to leave you. I want to hear it from your lips, not read it off a piece of paper, and I will go and never bother you again," he finished, pointing at the door.

Roman left his chair as the request ran through his mind. Styles was obviously distraught over his decision. The look he landed on him seared his soul. Roman had to turn away from it. His sense of duty rose within him, in battle with what his heart felt. Private Styles' suggestion was exactly what he should do. He was a seasoned soldier in the United States Army. Protocol dictated nothing less, and so did the law of the land.

Roman turned around. Styles stood waiting for his response. He was young, too young to have so much passion for Roman. His mouth was parted and his bottom lip quivered slightly. For more nights than he could count, Roman had stroked his cock thinking about that very mouth bringing him to completion instead of his hand. The brilliant blue eyes that stared back at him haunted his dreams nightly. Now they sparkled with distress and unshed tears. Seeing the anguish there was like a knife in his heart. He just wanted to ease Styles' pain. Knowing that he was the cause of 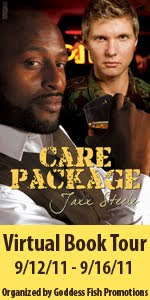 that hurt was his undoing. He quickly closed the distance between them and slipped his hand behind his subordinate's head.

"God help me, but I cannot give that order," he said, then fused their mouths together.


Want to know a little more about Jaxx?

I have been told by many female friends that I am the perfect man that women are looking for... if only I sought them and not men. After thinking about that statement for a while I came to like it and have taken it as my own. My writings are a combination of some things that I have learned over the years, good and bad, mixed up with a lot of imagination. I can only hope that you like what you read.

I was born and raised in Brooklyn, New York, but I escaped and I now live in Indiana. My dream is to buy a house near the beach and write all day and make enough money to live off of. I spend most of my time working a nine to five and traveling, when I can, to new and wondrous places that I can incorporate in my stories (or that will at least spark ideas for me). I do have love in my life thanks to my life partner, Hou, and our cat, Judo, who graciously lets us live with him in his house. So, all in all, I have a full and happy
life.

And come on back tomorrow! Should be a great time. I can't wait.
Posted by Wendi Zwaduk and Megan Slayer at 4:00 AM