Normally today would be a Monday Moans day. Trust me, the characters are pouting. But I wanted to share a great new book with you. Michelle Picard stops by tomorrow with her book, Surviving Eden. What's the book about? Glad you asked. 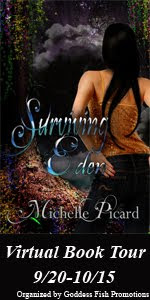 Here's the blurb:
Rachel Rieh wields enough magic to make a goddess jealous, or so she learned three weeks ago when she thought she was an ordinary, reclusive, and short-tempered gal from Boston. In this second story of Eden's Court, Rachel, now the new ruler of the Kesayim, (angels, demons, dragons, faeries, vampires, shapeshifters and witches the goddess-created protectors of mortalkind) finds herself faced with the task of stopping vampire hunters from annihilating the vampire race. Her lover, Gabriel, half-angel, half-demon, stands by her side to help if she can escape her obsession with protecting him at all cost.

Earth is already on the verge of destruction within six months because magic is out of balance. The new threat to the vampires destabilizes the situation more. In her race to save the vampires, Rachel meets Lillith, goddess, creator of all Kesayim and humans, and the one with all the answers to Rachel's problems. But is the cold-hearted goddess intent on changing Rachel into her image the greater threat to Rachel and everyone she loves?

Moonlight filtered through the windows of my bedroom, softly draping Gabriel’s naked body as he lay next to me on his stomach. His thoughts seemed to be somewhere else entirely. I loved how the pale light played along his flawless limbs, his smoothly muscled body. The silken sheets teased my already sensitive skin. I let my thoughts drift away from my gnawing guilt as I avoided discussion about my date with Colin. As Gabriel relaxed by my side, his aura glowed bright with his pleasure.

I’d given up on trying to shut-off my perception of auras. The dizzying visuals superimposed over everyone’s bodies were now becoming familiar, natural. Gabriel’s included the outline of a pair of wings jutting from his back. Their ghostly image had been present even before he manifested those wings for the first time during his battle with Michael in council.

Tonight was no exception. With downy feathers tucked magically away inside his body, a trick he alone of his angel counterparts could accomplish, his aura reflected their shining outline. The shadow wings were almost as lovely as the real thing.

I couldn’t resist running my fingers down the raised skin on both sides of his back while I lay beside him, my head supported by elbow and hand. I’d convinced myself Gabriel felt shy about the wings. I’d only seen them twice, including the time they manifested. But his hesitation to show them to me hurt. Perhaps he didn’t fully trust me. I dismissed that thought as ludicrous, but it still nagged at me.

My light tracing of the soft, barely perceptible tissue ridges sent pleasant tingles into my hand. His body tensed under the movement of my fingers and I felt his discomfort in the contact. Disappointed with his response, I stilled my fingertips.

“I won’t touch them if you don’t want me to,” I whispered into the hushed night of the room, holding my breath for his reply.

After a moment he relaxed, as if he’d fought through his initial hesitation to some decision. “Please continue,” he said, voice sleepy. “It feels good.”

I smoothed the ridges once again, delighting in the tiny shocks sparking into me. Gabriel’s voice bounced out into the moon-touched room, filling the space with its rich tones, surprising me with its serious intent. “When I was a child I fell asleep most every night dreaming of wings. I hated being born without them.” He paused. “The dream died long ago and I never thought to gain them. Yet… Here I am.”

My breath hitched hearing the pain of the memory in his cautious words. He sounded surprised to be speaking them. Guilt flooded through me for forcing him to expose himself to this hurtful past. Every day he walked into that negotiation room to manage the talks between the angels and demons. It was one thing for me to insist on facing my own memories head-on; another to see someone I loved forced into the same.

Gabriel caught my eyes before I could glance away. “I recognize that look on your face,” he chided. “You are blaming yourself, again.”

I kept my gaze on the window, the shadows of the garden just outside, wishing I could hide the waiver in my voice. “Don’t badmouth a little good old-fashioned guilt.” I tried to joke away his point-on comment. I swallowed past the lump in my throat and the will to give my smart-mouth rein died a sudden death. “My decision puts you in that room with them everyday.” I removed my hands from him, unable to continue my caress.

He shifted on his side, reaching his hand to cradle my face. “Being in that room may be frustrating, but it is valuable to me as well. I feel less need to run from them.”

My indignation surged on his behalf. I wanted to insist that he never ran, but hadn’t I accused him of the same weeks ago? My words had been to the effect that he’d bought into their crap about being an abomination. I’d wanted this experience for him--a chance to put to rest the ghosts that haunted him. I just hadn’t counted on how witnessing his pain during the process would shred my heart.

He smiled as if he’d recognized the play of thoughts and emotions running across my face and valued them. “I did run, in my own way. But being forced to watch the angels and demons confront their issues, I feel less like I am some shameful secret that must be denied.”

“I’m sorry this hurts you,” I blurted, my words choking me. I hated how out of control my emotions became with him. I valued my control.

His voice roughened with irritation. “You never forced me into the room. It was my choice, if you remember.”

“Do not make less of what I do by claiming responsibility for that choice. I survived hundreds of years making my own decisions before you were even born.”

Gabriel’s tone made my hackles rise for just a moment before I remembered his pain. He had a point, but I wasn’t about to give up on blaming myself in this matter. Call me masochistically stubborn.

His momentary anger dissolved, shifting into an all too different mood. His fingers moved in a caress of my cheek. He was a master at distracting me when he wanted and I’d sullenly noted before how most of the time this was a good thing. “Besides,” his voice lazed, “I need your mind focused elsewhere. It has always been my fantasy to make love to a woman with wings wrapped around us, brushing along our bodies.”

My mouth quirked up as my nipples tightened. “Any woman in particular, or will you just put out a personal ad? Wanted: female with wing fetish. Only those already butt naked need apply.” His chuckle tightened all things lower on me and I shifted on the bed, anticipation licking my skin.