It's a Book Tour for Kim Pierce's book, My Dead True Love. This is an original book and you'll want to keep reading. There are also prizes to be won. Like? A randomly drawn winner will receive a $50 Amazon/BN GC. How cool is that? Want more chances to win? Then follow the tour! You can do that here: https://goddessfishpromotions.blogspot.com/2022/09/nbtm-my-dead-true-love-by-kim-pierce.html 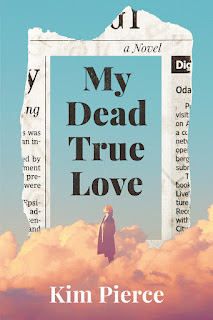 When a newspaper reporter’s fiancé dies abruptly, she questions how he could just cease to be.

Dogged by unbidden thoughts, odd coincidences and unexplained phenomena, Ann Stewart becomes obsessed with finding out what really happens after we die and whether her beloved Gregory is still out there. She finds her answer, which takes her and a close-knit coterie of women to the edge of the cosmos—and the core of their own hearts.

Based on a true story.

“It was definitely Gregory,” Connie declared, forcing herself to return to the vision. “As clear as if he were standing next to me. Smiling.”

“If you saw him”—and I still wasn’t believing—“did he see you? Did he see me?”

It made no sense, but I had to know more.

“I don’t know. I tried to un-see him. I really did,” she said, turning to me, something akin to terror twisting her face. “This ‘seeing’ is a part of me that triggers so much shame—and reactivates the trauma. Like shell shock.” Red mottling crept up Connie’s neck and onto her cheeks.

She saw him. The words slid off my brain as if she were speaking in tongues. What did that mean?

“Could it have been your imagination?” I offered wanly, not wanting that to be the case.

Neither of us believed it.

Tell me. Even if it makes no sense.

“That there’s something wrong with me,” came her acrid reply. “Deeply, terribly wrong. At least that’s what my father would say. And a lot of other people who make judgments about what I can do.” She slammed the car into park a little too aggressively.

“There’s nothing wrong with you,” I said, getting out of the car.

Connie shut down.
“I need to go home for a while,” she said.

Kim Pierce is a former Dallas Morning News writer and editor who completed the Writer’s Path fiction program at Southern Methodist University. My Dead True Love is her first novel, inspired by events surrounding the death of her fiancé in 1998. She lives in Dallas, Texas, with her partner and three cats.

Thank you so much for hosting this tour.

I love the cover and look forward to reading the book.