This post is part of a virtual book tour organized by Goddess Fish Promotions. Deborah A. Bailey will be awarding a $30 Amazon or B/N GC to a randomly drawn winner via rafflecopter during the tour. Click on the tour banner to see the other stops on the tour. 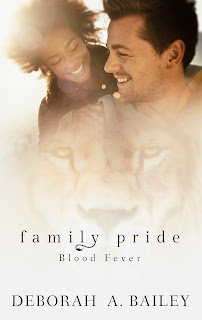 After claiming Zora Mason as his mate, and fighting off a threat to the MacKinnon pride, Mac is more than ready to get back to managing his coffee bar and settling into mated bliss. But just when it looks like things are quieting down, Mac and Zora find more challenges ahead.

Plans for Zora and Mac’s official introduction to the pride, and the opening of the new coffee bar may be derailed when, gripped by a mysterious blood fever lingering after the leadership challenge, Mac is driven to the edge of his endurance as he fights to keep his inner lion under control.

Juggling her responsibilities in the business and her position as the mate of the pride leader becomes even more challenging when Zora is forced to confront her fear that Mac is changing into someone she doesn’t recognize.

As the fever pushes Mac to the edge, the revelation of an old, painful family secret proves to be the key to saving Mac’s life. Zora and Mac come up with a plan to end the threat of the fever forever, but that same plan may destroy them both.

Is their love strong enough to defeat the blood fever, so they can live happily ever after as mates?

She heard it. Scratching. Where was it coming from? She froze as she realized it was at the front door. Scratching accompanied by a low growl.

Fear bubbled up from the pit of her stomach. Holding her breath, as though whatever it was could hear her, she set the carafe down on the counter. What was out there? Only one way to find out.

Tiptoeing across the floor, she made her way to the window next to the door. Even though her hand was shaking, she managed to move the curtain just enough so she could peer out. She saw their cars, and nothing else. Unfortunately, her view didn't allow her to see if anyone was directly in front of the door.

More scratching, this time like a claw was dragging across the wood. She went to the door but stopped with her hand poised over the knob.

"Mac?" Her voice was little more than a croak. By now her heart was thundering in her chest, as adrenalin flooded her, preparing her to run if she had to.

Another growl, then the sound of something or someone falling against the gravel.

She couldn't stand there wondering what was going on outside. She had to find out. Zora turned the knob and opened the door just enough to see who was on the other side.

"Mac!" She flung the door open with such force that it swung back and banged against the wall.

He fell into the doorway and hit the floor. Dragging himself, he reached out to her, his fingers bloody. "Zora…help me…"

She dropped to her knees and pulled, trying to help him get traction to cross the threshold and into the house. But he didn't have the strength to help her.

"Baby what happened?" She was on her knees now, grasping him by the shoulders. "Mac!"

He fell over on his back and she saw the scratches across his chest, and a long bloody gash along his thigh. What had happened out there? His body was covered in dirt and sweat. 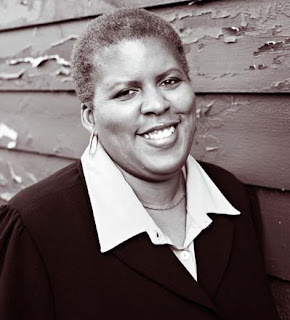 Deborah A Bailey's Romantic Fantasy, Paranormal & Science Fiction Romance novels include suspense, a bit of mystery and a lot of romantic heat.

Her short stories have won awards from the Philadelphia Writers' Conference and have been published in US1 Magazine and the Sun and are included in, Electric Dreams: Seven Futuristic Tales. She's the author of non-fiction books, and articles for various online publications.

Visit her website for more information and subscribe to the newsletter so you'll be the first to find out about giveaways, book launches and sneak peeks.

Happy to be here today! Thanks so much for hosting my book. Hi everyone! Please let me know if you have any questions!