VBT The Signs We Missed by Lena S. May

Today I'm hosting a tour stop for The Signs We Missed by Lena S May. You'll want to stick around. There are prizes to be won and this looks like an interesting story. What's up for grabs? Lena S. May will be awarding a $10 Amazon or Barnes and Noble GC to a randomly drawn winner via rafflecopter during the tour. Want more chances to win? Then follow the tour. You can do that here: https://goddessfishpromotions.blogspot.com/2022/06/vbt-signs-we-missed-by-lena-s-may.html 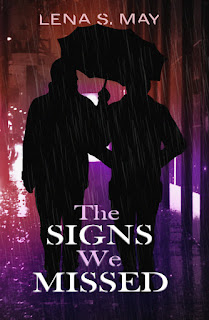 The Signs We Missed
by Lena S. May
Thrown out by his mother, 17-year-old Luke hopes to overcome his narcotic addiction and depression by changing his surroundings. At his new school, he quickly becomes friends with Sean, but finding that his developing feelings aren’t returned, Luke retreats into old habits. Determined to hide his self-injurious behavior and an advancing eating disorder, he soon risks much more than a broken heart.

When Sean meets Luke, the last thing on his mind is falling in love with a boy. Grappling with his own conflicting emotions and trying to keep them from his suspicious girlfriend, he brushes off Luke’s strange behavior. But when Luke suddenly cuts him off, Sean is forced to confront the truth and take action to save his best friend.
~~~~~~~~~~~~~

Now for an Interview with the Author and Main Character Luke!

Luke: Introverted, over-thinker, and a hopeless romantic – which is not always a winning combination, so if anyone happens to be willing to trade the overthinking part, I’m here for that.

Lena: If there’d ever be a book-to-screen adaptation for The Signs We Missed, the one thing I wish I’d get a say in is who to cast for Luke. My vote, then, would be for Mika Engelhardt, who has been dreaming of being an actor pretty much the same way that I have been dreaming of being an author since we were kids. I’m going to admit I don’t know a whole lot about acting or making movies, but I’ve been lucky enough to see several of his performances, and I’m pretty certain playing a gay teenager would be right up his alley. He also looks a little like Luke – or maybe Luke looks a little like him, who would know?

3. What’s your favorite love scene from a movie?

Luke: I think out of all big love scenes that come to mind, the one that resonated and stuck with me the most doesn’t even include both lovers, let alone a kiss. It’s from Were the World Mine, a (pretty overdone, pretty gay, 10/10) adaptation of Shakespeare’s A Midsummer Night’s Dream, in which the main character falls in love with his (allegedly straight) classmate. In his copy of Shakespeare’s play, he finds the recipe for Cupid’s Love Potion, which, if you get it in your eye, makes you fall in love with the first person you see afterwards. That’s how that line that has been haunting me comes about, as he (obviously, because who wouldn’t?) considers making the potion and asks his best friend: If you could make someone love you, would you? The movie comes up with an answer, of course. Me? I’m still not sure. I probably would have without giving it much thought when I first fell in love with Sean, but then again, it’d be incredibly selfish, tying him to someone like me. On the other hand, with that kind of enthusiastic, blind love depicted in the movie, I guess he wouldn’t even notice how much of a mess I am. It’s a tough one. Maybe in some situations I would, knowing I shouldn’t.

Luke: To be enough. I see others who feel like they are enough and deserving of love and happiness, but I don't know if I ever will be. My wildest fantasy is to be worthy of love. To be enough for myself and for Sean.

Luke: I’d obviously prefer to keep all my senses, but if I were to permanently lose one, I’d probably choose hearing. The world’s too loud anyway, and I guess at least hearing nothing would make sleeping a lot easier. I’d miss Sean’s voice terribly, though.

Boxers or Briefs? Boxers for Sean!

Top or Bottom? I sometimes wish Sean would be a little more confident so I could be a bottom.

Pajamas or nude? I usually fall asleep in whatever I'm wearing when my meds kick in.

Hairy chests or smooth? I don’t really have a preference. I enjoy the smoothness of Sean’s chest, but I would love it even if it was hairy.

Alpha or Beta? Actually, Fly is the closest thing to an Alpha I’ve ever seen, and she’s a bit scary – Beta for me.

Luke was lying on his back, his phone in one hand, a cigarette in the other.

He had missed the ashtray several times in the past hours, resulting in black burns on the sheet beneath him. It didn’t matter, and they weren't visible in the dark anyway.

The blood wasn't, either.

He was still fighting to forget the pills and the water on the nightstand.

Today had been the first day in a while he had felt well enough to leave the house. Still lousy, but well enough.

He had decided the lightness in his head and the nausea in his stomach were the outcome of him not eating much lately. Hardly anything, except for dry bread, tea, and an apple.

That led him to the conclusion that not taking his pills was no longer the cause of his miserable condition; at least that was what he had tried to convince himself of on the way to the emergency room.

He should have thought of that earlier.

It was Sunday, the only doctor on duty had looked fatigued and stressed. He'd probably been glad all he had to do for Luke was to write him a prescription.

Warning him to get a new prescription earlier next time and keeping the emergency room free for emergencies, he had let him go in no time.

Luke's hands had been shaking when he tried to open the package at home.

Then, at the very last moment, he had changed his mind and slammed it down on the nightstand, almost angry. 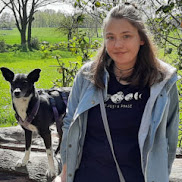 Lena S. May is a Germany-based author and student. Living with her dog, she enjoys long walks, ideally followed by a cup of tea and an equally long reading session. After graduating university with a degree in English and American and German Studies, she is working towards her Master of Education to become a secondary school teacher. With her writing, Lena hopes to raise more awareness for mental health and the importance of looking out for one another and oneself. Her debut novel will be published in August 2022.