This post ispart of a virtual book tour organized by Goddess Fish Promotions. Connie di Marco will be awarding a $25 Amazon or B/N GC to a randomly drawn winner via rafflecopter during the tour. Click on the tour banner to see the other stops on the tour. 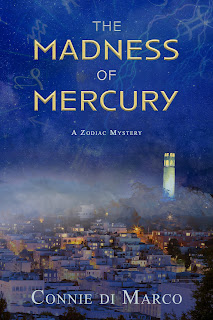 The Zodiac Mysteries feature San Francisco astrologer, Julia Bonatti, who never thought murder would be part of her practice. In The Madness of Mercury, Julia’s outspoken advice in her newspaper column, AskZodia, makes her the target of a recently-arrived cult preacher who advocates love and compassion to those less fortunate. But the power-hungry preacher is waging war on sin and his Army of the Prophet will stop at nothing to silence those who would stand in his way. Julia is at the top of his list.

Zora was walking in circles around the table, murmuring to herself. Nikolai had donned purple robes and placed several large candles around the room. He cut a very impressive figure. He caught my eye and winked. Gudrun and Eunice were closeted upstairs in Eunice’s room, while everyone else waited in the parlor. I was fairly certain Nikolai would put on a good show. Depending on what happened, I just hoped it wouldn’t be too upsetting or disappointing for Evandra.

Zora turned to me, “There are strong energies close by. I feel sure we’ll have some communication tonight. Julia, will you ask everyone to come in, please.” I nodded and left the room. I found Reggie chatting happily to Alba in the front parlor. She nodded occasionally, but seemed distracted. She looked frightened and I was sure she was only here under duress.

Richard led Evandra slowly down the stairs and into the library and helped her sit. Her face was flushed with excitement. Richard sat next to Evandra and Dorothy took the seat on the other side of her aunt across from Reggie. Alba hesitated in the doorway but finally took a seat at the round table next to Reggie. I sat on Reggie’s other side. When we were all seated, Nikolai and Zora sat down across the table from each other. Outside the rain pelted furiously against the library windows. I caught a flash of lightning and the lights in the chandelier flickered for a moment. It happened so quickly I wasn’t sure I hadn’t imagined it.

Nikolai had turned off the lights in the front parlor and dining room. A small lamp was still lit in the front hallway. No light could reach us in the library. Candlelight cast eerie shadows against the bookshelves and ceiling. No one spoke a word. We waited for Nikolai’s instructions. He stood and raised his arms. In a booming voice, he spoke. “As I pass through the vays, I feel the presence of the gods. They are vith me and I vith them forever.” He glanced around the table at each of us, and finally with a nod from Zora, said, “May vee in this circle be protected from any and all harm.”

Nikolai sat down. “Please. Take hand of the person next to you.” He reached over and took Richard’s hand on one side, and Alba’s on the other. He nodded once to Zora. “Be patient everyone, and vhatever you do, this is most important, do not break circle.”

Zora closed her eyes, breathing slowly and deeply for several minutes. We watched her intently. No one spoke a word or appeared to breathe. Nikolai studied Zora’s face. After several interminable minutes, Zora’s head dropped to her chest, her breathing was faster.

Nikolai spoke. “Is someone here? Do you haf message for us?”

We waited. Zora continued to breathe rapidly. Nikolai asked again. “Is anyone vith us tonight?”

Zora raised her head slowly, her expression had shifted. She rose higher in her chair, her head slowly turning from side to side with a coquettish air. Her neck appeared to lengthen. “I’m here. I’ve been trying . . .” I stared, not sure if what I was seeing was a trick of the light.

I glanced at Reggie and Alba. Reggie’s mouth hung open in disbelief. Alba looked frightened, as if she were about to flee the room.

Nikolai spoke, “You haf message for us?”

“Yes.” The voice was not Zora’s normally rough tone. It was several octaves higher. The skin on my arms prickled. What was happening? I struggled to stay in this reality. Could Zora really be channeling Lily’s spirit?

“What nonsense,” Dorothy muttered her breath. Richard shushed her.

Nikolai spoke, “Danger for whom, spirit?”

Zora raised her head, her eyes were blazing, “For all.”

A tremendous thunderclap struck, shaking the entire house. A bolt of lightning lit up the sky beyond the library windows and threw the stone statuary in the garden into high relief. A cold draft swept through the room. The candles flickered in the sudden rush of air and were extinguished. Evandra cried out and collapsed in her chair.

Connie di Marco is the author of the Zodiac Mysteries featuring Julia Bonatti, a San Francisco astrologer who never thought murder would be part of her practice: The Madness of Mercury is the first in the series. Writing as Connie Archer, she is also the author of the national bestselling Soup Lover’s Mysteries from Penguin Random House. You can find her excerpts and recipes in The Cozy Cookbook and The Mystery Writers of America Cookbook. Connie is a member of Mystery Writers of America, International Thriller Writers, The Crime Writers Association and Sisters in Crime.

Thanks so much for hosting The Madness of Mercury today!