Blurb Blitz : One April After the War by GS Boarman

It's a blurb blitz and this time I'm featuring the book One April After the War by GS Boarman. You'll want to check this book out. You'll also want to stay right here to keep reading. Why? G.S. Boarman will be awarding a $10 Amazon/BN GC to a randomly drawn winner via rafflecopter during the tour. How cool is that? Want more chances to win? Then follow the tour. You can do that here:
https://goddessfishpromotions.blogspot.com/2022/02/blurb-blitz-one-april-after-war-by-gs.html 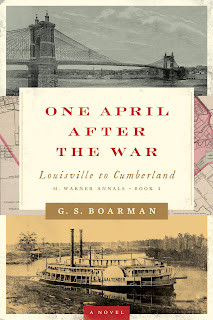 One April After the War

When Mary Warner is requested to attend a meeting with her estranged godfather, President Ulysses S. Grant, she quickly finds that an invitation from the office of the President is an offer she can’t refuse.

Fresh from concluding a counterfeiting sting in Cincinnati, Secret Service agents Merritt and Argent are tasked by the President to convince Miss Warner to return with them to Washington, D. C. For the two Treasury agents, this simple assignment to escort the socially awkward and willful young woman on an 800-mile railroad journey from Louisville, Kentucky to the White House proves far more interesting and difficult than the men could have ever thought possible. And, in the face of danger, it may just turn out that Mary is more of an asset than a problem for the two agents.

For Mary Warner, the trip begins to take on a sinister meaning as she finds herself virtual prisoner to Merritt and Argent. Madness, morality, and murder all swirl in a strange April storm at midnight turning this odd odyssey into something so much more than a mere trip between cities.
~~~~~~~~~~~~~
Now for an Excerpt:

Merritt looked over to M before resuming his seat. She seemed completely unperturbed by the stranger’s arrival, appearance, or attitude. She had, in fact, stopped studying the stranger as soon as his presence became known to Argent and himself. She was now studying Merritt, with some expectation in her gaze. He apologized for the intrusion of the stranger, then again took up his newspaper. Argent also apologized, with the promise that he would speak to the porter about restricting access to their apartment. Having been dismissed of all but the most basic duties in this apartment, the least he could do was to keep intruders at bay.

M tried to return to her reading, but her mind was restless, her thoughts both insistent and scattered, and she could not bring her mind to bear on what she read, nor could what she read bring any order to her thoughts. She finally gave up the effort and turned her head towards the window. No matter what Argent thought, the air was fresh and cool.

She was still awake, though seeing nothing, when she heard the outer door quietly open and shut. She waited to see if it was the strange man returned to murder them all, and it was as she waited that she drifted into sleep. Her scattered thoughts coalesced into a memory of the creek at home and in this memory was Merritt, and they played together in the creek, though they were both grown; he made her laugh, like Randy used to do.

After the death of G. S. Boarman, a great niece cleaned out the old Kentucky family farmhouse and in the attic, amid the rusting coffee mill, the rickety outdated furniture that was still awaiting repairs, and the stacks of vermin-eaten Harper’s Weekly’s and Police Gazette’s, she found a curious box marked simply “M”.

On the kitchen floor, the metal hasps were flipped back and the top pried off. Lying on the top of a very neat and orderly collection of things was a scrapbook and lying loose inside the scrap book was a note that said simply, “Please finish the story.” The scrapbook itself contained a rough outline of a narrative with sometimes undecipherable glosses and cryptic references to mysterious sources.

From letters and notebooks, ledgers and calendars, train schedules and stockholders’ reports, the story was slowly extracted and pieced together, and the small treasures, carefully wrapped and preserved in the box, took their place in the narrative.

Boarman’s will had already been read, probated, and executed, but the niece, as executrix, felt obligated to fulfill Boarman’s last wish — to breathe life into the long-ago story of a woman who held some importance to Boarman.

The books sound great, thank you for sharing.