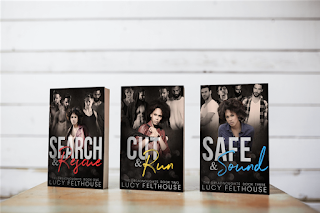 Safe and Sound is the third and final book in The Dreadnoughts series. All three books are currently in Kindle Unlimited, but will be withdrawn in August, so if you’re a Kindle Unlimited subscriber, make sure you read the books sooner rather than later! I would hate for you to miss out. 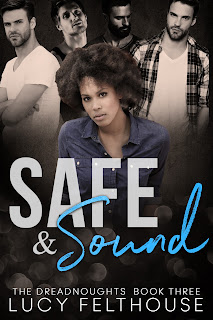 Kim is within touching distance of her goal – but is it already too late?

Kim Medhurst, ex-British military intelligence officer turned scientist and climate activist, is in a race against time. With help from her four men, she’s researching how to make the ygrene – the mysterious power source she retrieved from a remote Scottish island – a viable alternative to fossil fuel. An unexpected visitor recently bought them a little extra breathing space, but they’re painfully aware it won’t last forever.

Despite their hard work, the whole thing looks set to crash down around their ears when the greedy megalomaniac they’ve been desperate to avoid shows up on the Greig twins’ doorstep. While Kim and the gang would happily lay down their lives to stop the ygrene getting into the wrong hands, Kim would prefer to steer clear of violence. Their latest visitor claims he only wants to talk, but he’s brought goons carrying hardware, and Kim wouldn’t be Kim without a backup plan.

Will good prevail against evil, or have all the gang’s efforts and sacrifices been for nothing?

Buy at Amazon, read in Kindle Unlimited or purchase the paperback (audio coming later in the year): https://books2read.com/safeandsound

Enjoy the other books in this completed series. It’s highly recommended you read them in order—it won’t make a lot of sense otherwise! These two books are available in eBook, paperback and audiobook formats.

Book one, Search and Rescue: http://books2read.com/searchandrescue 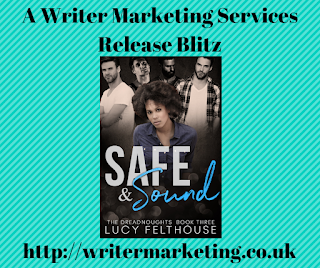