VBT The Woods of Hitchcock by Ann W. Jarvie

It's a virtual tour and this time it's for The Woods of Hitchcock by Ann W Jarvie. You'll want to stick around because there are great prizes to be won. Like? Ann W. Jarvie will be awarding a $75 Amazon or B/N GC to a randomly drawn winner via rafflecopter during the tour. Want more chances to win? Then follow the tour. You can do that here:

The Woods of Hitchcock 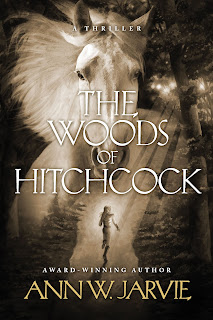 The Woods of Hitchcock by award-winning author Ann W. Jarvie is a thriller about a psychically gifted Chicago copywriter and victim of violence who returns to South Carolina's equestrian country to solve a riddle involving murder, the metaphysical and the secrets of her eccentric family.

Suzanne Clayborn is a psychically gifted southerner working in her dream job in Chicago, which also conveniently takes her away from the ghosts of her past. But when she's nearly killed, she realizes all she wants is to return home to her eccentric family, her horse and the one place she feels safe: Hitchcock Woods, an enchanting equestrian forest in South Carolina.

But instead of finding solace, Suzanne becomes entangled in a murder spree, while stumbling upon an old manuscript, written by her sage grandmother. As she explores it, Suzanne uncovers a tome of long-buried family haunts and ancient metaphysical secrets offering healing and inspiration. She also begins to understand her unwanted psychic abilities, especially after meeting a mysterious stranger in the Woods whose ominous riddle suggests others close to her will die within the week...

Brimming with raw emotion and a trail of psychological twists, a story of hope and transformation begins to unfold. Yet with the riddle's deadline looming, Suzanne's present must ultimately collide with a violent past. Will she be able to solve her life's riddle and fulfill her destiny? Or will she die along with those she loves?
~~~~~~~~~~~~~

For Suzanne, the Woods possessed a special nurturing power, awesome and quiet, that was able to draw an assemblage of friends, neighbors and varied strangers, bonding them together at the level of heart, horse and hound like no other place on earth. Even the forest’s subcultures held her respect and fascination with their vast mini-universes, pulsating with life. The fuzzy caterpillars were already nesting in their massive weblike tree tents, as silent as seeds sprouting, dreaming of their aerial futures. Carolina lizards were guarding their stands of shrubs from the moist bunkers of leaf mold and fallen bracken. Honeybees worked on the pollen of azaleas under nutrient-rich pine needles, swaying and green. The staccato knocks of the pileated woodpecker mixed with the intermittent calls of cardinals and blue jays, while the lulling songs of warblers carried weightlessly on an ethereal stream of a humid wind.

Why did you decide to write about the equestrian country of SC for this book?

There are many reasons I chose a romantic equestrian setting for my new thriller, The Woods of Hitchcock. First, a lot of story ideas I’ve had over the years and many of my life themes, including a love of horses, converged to form the inspiration for it.

When I was growing up in South Carolina, and first heard about “Hitchcock Woods,” which is a real place, even as a young teen, I honestly thought it sounded more like a suspense novel than the enchanting equestrian forest preserve that it is. Perhaps I was seeing into my own future. While I was living in Chicago and started writing novels, I kept coming back “home” and to Hitchcock Woods, walking and riding horses in it with family and friends, eventually realizing it, as well as Chicago, would be the ideal settings for my protagonist, Suzanne Clayborn, and her suspenseful Hero’s Journey.

And then there’s the actual name of the equestrian forest itself: Hitchcock Woods. Although it has absolutely nothing to do with the filmmaker, Alfred Hitchcock, I liked the immediate name/word association it had with the suspense I wanted to create for this novel. The name allowed me to not only feature my favorite equestrian locale as my primary setting, but also use a few subtle Hitchcockian film themes and literary plot devices in the story—for added fun, surprise and suspense. I even included something that might be likened to one of Alfred’s famous “cameo” appearances, and I challenge readers to find it!

Thank you, Wendi, for the opportunity to talk about horses and The Woods of Hitchcock, a thriller that will hopefully make your heart race! 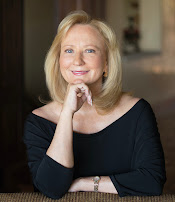 Ann W. Jarvie has a B.A. in journalism and twenty-five years’ experience as a writer in advertising and public relations agencies, in Chicago and South Carolina. Although it stands completely on its own, The Woods of Hitchcock is an indirect sequel to Jarvie’s award-winning debut novel, The Soul Retrieval, which received four literary awards, the highest score by Writer’s Digest e-Book Awards’ judges (5 out of 5 on all points) as well as myriad positive reviews. Jarvie currently lives in Paradise Valley, Arizona with her husband, their boxer dog and boxer mix rescue.

The Woods of Hitchcock, A Thriller by Ann W. Jarvie, is available online everywhere, including:
Barnes and Noble: https://www.barnesandnoble.com/w/the-woods-of-hitchcock-ann-w-jarvie/1139765258
Amazon: https://www.amazon.com/Woods-Hitchcock-Thriller-Henrietta/dp/0578932008/ref=sr_1_1
a Rafflecopter giveaway
Posted by Wendi Zwaduk and Megan Slayer at 12:00 AM

I love the cover and think the book looks good.

Thanks, Wendi, for hosting me today on your wonderful blog! I'm looking forward to answering additional questions from readers. Best, Ann

Congratulations on your recent release of The Woods of Hitchcock, Ann, I enjoyed reading the guest post, the excerpt and your book sounds like a thrilling read and I like the cover! Good luck with your book and I hope the tour was a success! Thanks for sharing it with me and have a fantastic weekend!

Happy Friday! I hope that you have enjoyed your book tour and I wish you the best of luck in all of your future endeavors. I have enjoyed reading about you and your work throughout the tour and I am looking forward to reading your book. Have a great weekend!

Do you like listening to any music while writing?