This post is part of a virtual book tour organized by Goddess Fish Promotions. Heather Hallman will be awarding a $25 Amazon or B/N GC to a randomly drawn winner via rafflecopter during the tour. Click on the tour banner to see the other stops on the tour. 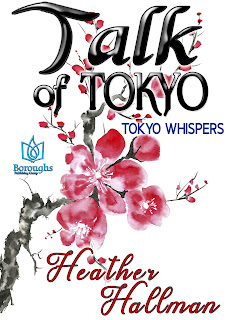 CAREFUL WITH YOUR WORDS

1897 Tokyo is no different than anywhere else in the world: men are exploiting women. Specifically, Western men are exploiting Japanese women, and Suki Malveaux holds no punches in her condemnation of their behavior in her weekly column in the Tokyo Daily News.

Suki knows firsthand when Western men arrive at Tokyo Bay there’s only one outcome for Japanese women: a child and new mother left behind as nothing more than discarded shrapnel from the heartless war on love.

Griffith Spenser is her latest target. He’s been seen with Natsu Watanabe, one of Tokyo’s esteemed war widows. Under full anonymity of the moniker “The Tokyo Tattler,” Suki makes sure Griffith knows exactly why his behavior with Natsu won’t be tolerated.

Away from her Japanese mask as a columnist, Suki never intended to meet the cad. When he seeks her out to hire as a tutor for his niece and nephew, she’s faced with seeing him day in and day out without him ever knowing who she really is.

Caught in her struggle for anonymity so she can keep battling for women’s rights, Suki’s about to learn the full impact of her words on the people behind the story, especially on Griff.

“The door is over here,” a man called from the house.

Had Emperor Mutsuhito been standing on the front porch, Suki wouldn’t have been more surprised. The irate gentleman she’d been expecting was looking at her with an expression of mild amusement. Up to now, she’d only caught glimpses of the incorrigible rake in passing. Closer examination revealed an angular jawline that an aspiring journalist might wish to trace with her finger and cheekbones ordinarily found on statues of world-conquering kings. Pillow-like lips, one touch of which would make a woman’s insides melt, were already having that very effect on her.

Griffith Spenser was downright handsome. But not in a way that made Suki swoon into the azalea bushes. A crease lined the middle of his chin, and his nose could be described as a bit wide, his brow as a bit too high. The caramel-colored hair atop his head hadn’t been set with a pomade but permitted its thick waves, adding a few inches of unruly height to the already tall, lean gentleman.

Given his reputation, she should have been prepared for a strong dose of masculine appeal. But her head felt light and airy, and her breath had all but disappeared. In its place, a bubbling sensation portended a spell of the giggles. Gripping her satchel, she took in enough air to restore her powers of reason. Unless she got to work, Spenser was going to be the instrument of her undoing. Fortunately, she knew his weakness. Like most foreign men who arrived on Japan’s shores, Spenser was enamored with the nation’s beauties. And although her chignon had loosened to lopsidedness, and her kimono bore the marks of a full day’s teaching, and she was, in fact, only half-Japanese, she could muster enough charm to make Spenser reconsider his plans. 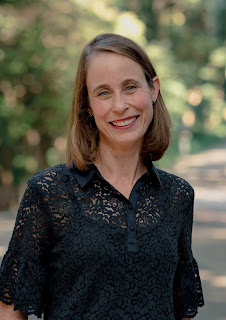 Heather Hallman writes witty, sensual, contest-winning romances set in Meiji-era Japan (1868-1912). She is the author of the Tokyo Whispers series that includes Scandals of Tokyo and Talk of Tokyo.

She is fluent in Japanese language, history, and culture, and earned a doctoral degree in cultural anthropology based on fieldwork research in Japan. She lives in Tokyo with her professor husband and two young daughters. In her free time, she can be found translating ancient Japanese poetry and observing the passing of seasons while sipping green tea. Just kidding, she has no free time. But she does watch something that makes her laugh while she does the dishes.

Perennial obsessions include the weather forecast (she checks three different apps at least three times a day, as no single app can be trusted), Baltimore Ravens football (hometown obsession), and making smoothies that taste like candy bars.

Feel free to chat her up about any of her obsessions, or, even better, about historical Japan—any era is fine, she loves them all. She also enjoys exchanging book recommendations, discussions about the craft of romance writing, and stories about life in present-day Tokyo.

Hello, Readers! Thanks so much for checking out Talk of Tokyo. I’ve lived in Japan for over thirteen years and counting. One of the many things keeping me here is the cuisine. 🍣🍜🍤

How about you? Fan of sushi or other Japanese dishes? If you’ve got a minute to spare, let me know. I’d love to hear about it.

It’s almost bedtime in Japan, so I’ll be checking comments toward the evening USA time.

Thank you to Wendi for hosting the tour!