This week I'm featuring Grave Robbing and Other Hobbies by Jayce Carter. You'll want to keep reading. Why? Because this book looks awesome. Plus, there are prizes involved. Like? One randomly chosen winner via rafflecopter will win a $50 Amazon/BN.com gift card. So get to work and read this book, plus the post. Want more chances to win? Then follow the tour. You can do that here: https://goddessfishpromotions.blogspot.com/2021/02/fs-vbt-grave-robbing-and-other-hobbies.html 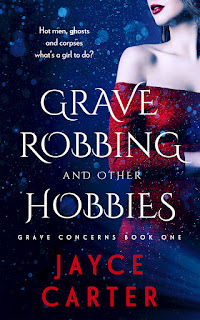 Grave Robbing and Other Hobbies

Abandoned at three—whose parents want a kid who sees ghosts?—I learned the world is quick to punish misfits. I try my best to be a normal, boring human, but the call of the supernatural just won’t be ignored.

When a stranger shows up on my doorstep in the middle of the night, it’s no sexy tryst. Instead, I’m off to the graveyard, digging up the corpse of a murder victim at the demand of the local vampire coven—and that small felony is just the start.

The spirit of the woman has gone missing, something that shouldn’t be possible, and everyone is looking to me for answers. There's Kase, a vampire who’s both terrifying and secretive. Grant, a mage with a bad attitude and a lot of power. Troy, the possessive werewolf-detective next door and Hunter, a mysterious bad boy who isn’t even close to human.

It’s a race not just against time but against everything to figure out where the spirits are going, who’s behind it and if I can trust the men who now share my bed.

And all because of a little grave robbing…

“You need to do something,” I said as Kase and Troy struck a wall and knocked off a painting. Sure, it was a cheap one I’d picked up at a chain store, some mass-produced image of cherry blossoms I’d always thought would make me a calmer person, but it was my stupid painting and they’d ruined it!

The two fighting seemed unaffected, however, as Troy flung Kase off him and Kase sailed back, almost faster than my vision could follow.

I was about to tell Grant it hadn’t worked when I realized he had a bowl of popcorn now.

Had he really used his magic to summon popcorn? Hunter reached over me to grab a handful.

“You said you couldn’t use magic for frivolous things,” I stammered.

“You used it to get popcorn!”

Grant lifted the popcorn as though to make a point. “This isn’t frivolous, Ava. There is a man-on-man fight here—that requires snacks to properly watch. Get your priorities straight.”

My mouth hung open. Every time I thought I had my feet under me with these men, they showed me how wrong I was.

“They could kill each other,” I finally said.

“Sure, but they won’t.” Hunter stole another handful of popcorn and tossed some in his mouth, a few pieces falling to the couch. “Troy hasn’t fully shifted and Kase isn’t biting. This is just one of those macho alpha dominance shows. Let’s all be glad they’re doing this instead of actually measuring dicks. Trust me, that just hurts feelings.”

Now for an interview:

What is the sweetest thing someone has done for you?

My son tells people to buy my books. Now, of course, he isn’t allowed to read them given he is only 9. He knows that the content is for adults, but he loves me and wants me to succeed. I have had to explain to him that trying to get every adult at his school to buy my books is sweet, but not appropriate. Still, I can’t deny it warms my heart that he supports me, even if it has caused some uncomfortable parent-teacher conferences.

How would you spend ten thousand bucks?

I would put it into building my office. I currently work at a desk in my living room, which is far from ideal. I would love a place to work in quiet, where I can close the door and focus, and that money would go a long way toward creating that for me.

Where do you get your best ideas?

I am always doing ‘what-ifs.’ That is where I get most of my ideas. I will watch a show and take some small thing from it and go, ‘well, what if instead of that, this happened?’ I do this with research, with books, with conversations. Honestly, I am the sort of writer who doesn’t worry about ideas because I have far more than I will ever by able to write.

What comes first, the plot or characters?

Characters. I suppose I know my tone prior to that (as in light contemporary or dark paranormal), but characters always take priority for me. I feel like they drive the story, especially in romance where the relationship is so important. Plus, the plot will only make sense if it fits the choices a character would make.

What does your main character do that makes him/her special?

I think Ava is special in that she isn’t. What she really wants in her life is to be accepted, and that is so universal. We all want to fit in, to feel like we have a home, and almost everyone knows how much it hurts to not have that. While her story takes her to fantastical places, it is the heart of that, the yearning for belonging that makes her so relatable.

Jayce Carter lives in Southern California with her husband and two spawns. She originally wanted to take over the world but realized that would require wearing pants. This led her to choosing writing, a completely pants-free occupation. She has a fear of heights yet rock climbs for fun and enjoys making up excuses for not going out and socializing.

I love the excerpt and the cover.

I love this cover!