This post is part of a virtual book tour organized by Goddess Fish Promotions. Tracy Tappan will be awarding one "Hero" coffee mug: Keith or Brayden or Pete, winner's choice which one. (US only shipping) to a randomly drawn winner via rafflecopter during the tour. Click on the tour banner to see the other stops on the tour. 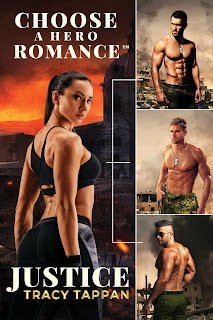 A star athlete with a notorious reputation, Justine “Justice” Hayes is offered the chance to join the United States’ elite Special Operations Forces. SOF is standing up three new units called “Special Missions,” and Justice’s past as a master thief makes her perfect to lead one of these intelligence-gathering teams.

But an impossible condition stands between her and her dream job.

She has to survive the Navy’s most intensive and grueling SPECWAR training program: BUD/S.

Despite opposition, Justice soon finds herself wearing the rank of a Navy ensign and competing with some of America’s toughest men. Two of these SEAL candidates will come to test her mind and her heart, as much as her will to keep business and pleasure firmly separate. Temptations multiply when she crosses swords with the cocky helicopter pilot who commands her Special Missions flight crew.

Her vow to maintain a professional distance is finally shaken when an unorthodox training exercise goes terribly wrong. In the brutal aftermath, she needs a man who cares about her to help her fully heal. But which hero will ultimately win her...?

The gentleman? The leader? The wild one?

In this unique Choose A Hero Romance™, the reader decides which hero will earn a happily ever after with Justice Hayes.

Love every hero in his own way?
You can have as many happily-ever-afters as you want!

When you’re finished with one ending, simply choose another and keep reading.

All endings are available NOW

Justice followed Pete inside his stateroom and banged the door shut. Loud noise: generated for reasons of temperamental satisfaction. She stood rigidly in place, lungs working hard. Beyond words. If the appearance of her eyeballs was anything like her vision, they probably looked like they’d been dunked in Red Dye Number Forty.

A man who knew what restraint actually was would’ve handled a woman in her condition—like a stick of dynamite on the tail end of its fuse—in a conciliatory fashion.

First thing out of Pete Robbins’s mouth was a Scottish accent. “She cannae take any more, Captain. She’s gonna blow!”

Astounded. Then murderous. Many more things, but Justice’s brain was actually spluttering. Robbins was mimicking Scotty from Star Trek. “You’re going to make a joke out of this?”

He shrugged. “Until I know what’s wrong, sure.”

According to the pressure in her ear canals, she was currently standing eight leagues under the sea. “What’s wrong,” she gritted back, “is that you’re dangerous.”

He perked up. “Oh, we’re doing Top Gun now? Cool.” He rolled into mimicking Maverick. “That’s right, Ice…Man. I am dangerous.” He gestured at her face. “Now you bite your teeth at me.”

She totally lost it.

Grabbing the collar of his flight suit in both fists, she slammed him back against the bulkhead. The metal wall rattled as if all the rivets were coming loose—she’d gained an unrealized amount of strength over the past months at BUD/S. 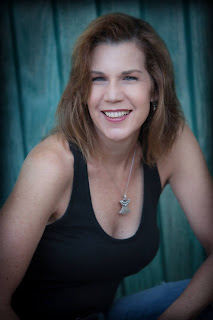 Tracy Tappan is a bestselling and award-winning author and the creator of the Choose A Hero Romance™ reading experience, a brand-new concept in storytelling where the reader controls the ending. You can find out more about this exciting new trend at http://www.chooseahero.com.

Tracy’s books in paranormal and military romance have earned both bronze and gold medals in the Readers’ Favorite contests, have finaled for the USA Book News and Kindle Book Awards, and won both the HOLT Medallion and the Independent Publishers Book Award (IPPY) bronze medal for romance.

Tracy holds a master’s degree in Marriage, Family, Child Counseling (MFCC), loves to play tennis, enjoys a great glass of wine, and talks to her Labrador like he’s a human (admittedly, the wine drinking and the dog talking probably go together).

A native of San Diego, Tracy is married to a former Navy helicopter pilot, who retired after thirty years of service and joined the diplomatic corps. He and Tracy currently live in Rome, Italy.

Visit her website and join the gang on her monthly newsletter for giveaways, publication updates, and other fun and sexy news. 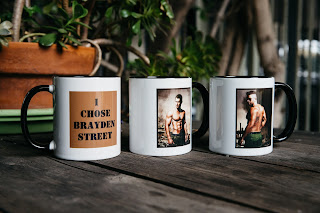 Thanks for having JUSTICE on your site today? Who is YOUR favorite hero--a leader, a gentleman, a bad boy...?