Virtual Book Tour ~ A Sickness in the Soul: An Ashmole Foxe Georgian Mystery by William Savage

It's a virtual book tour and there are prizes to be won. For what book?  A Sickness in the Soul: An Ashmole Foxe Georgian Mystery by William Savage . Looks good, doesn't it? Yeah. So what can you win? One randomly chosen winner via rafflecopter will win a $50 Amazon/BN.com gift card. How cool is that? Want more chances to win? Then follow the tour. You can do that here: http://goddessfishpromotions.blogspot.com/2019/09/vbt-sickness-in-soul-by-william-savage.html


A Sickness in the Soul: An Ashmole Foxe Georgian Mystery 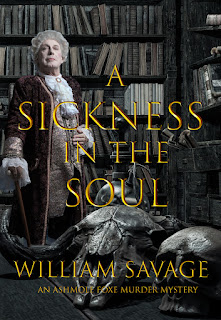 “Many people wear masks. Some to hide their feelings; some to conceal their identity; and some to hide that most hideous plague of mankind: a sickness in the soul.”


Ashmole Foxe, Norwich bookseller, man-about-town and solver of mysteries will encounter all of these in this tangled drama of hatred, obsession and redemption.


This is a story set in the England of the 1760s, a time of rigid class distinctions, where the rich idle their days away in magnificent mansions, while hungry children beg, steal and prostitute themselves on the streets. An era on the cusp of revolution in America and France; a land where outward wealth and display hide simmering political and social tensions; a country which had faced intermittent war for the past fifty years and would need to survive a series of world-wide conflicts in the fifty years ahead.


Faced with no less than three murders, occurring from the aristocracy to the seeming senseless professional assassination of a homeless vagrant, Ashmole Foxe must call on all his skill and intelligence to uncover the sickness which appears to be infecting his city’s very soul.


Can Foxe uncover the truth which lies behind a series of baffling deaths, from an aristocrat attending a ball to a vagrant murdered where he slept in a filthy back-alley?

Naturally, all this affability ended the moment Foxe stepped into the Great Hall itself. Sir Samuel would have used this as the meeting place to impress his influence and social status on all his visitors, and on Mr Foxe most of all. Now he received Foxe standing, his back to a large fireplace with an elaborate alabaster surround. Above him could be seen the coat of arms of the Valmar family. I may be a man like you, all this seemed to proclaim, but I am not just your social superior. I am a Valmar too. Remember that.

The baronet had dressed himself in a suit of fine brown wool embroidered in gold, over a pale cream waistcoat sprigged with tiny flowers. From his leather shoes with their golden buckles and his spotless white silk stockings up to his freshly powdered wig, he was the embodiment of the rich landowner suffering the attentions of some troublesome tenant. He was also in a combative mood. He launched his attack at once and without preliminaries.
‘Say what you have to say, sir, then get out!’ the baronet barked. ‘I am only suffering your presence because my wife begged me to do so. According to her, you have some important information affecting the Valmar family. My family heritage is everything to me. We Valmars came over with the Conqueror and have been here ever since. In all that time, no one has dishonoured the family name. No one ever shall, while I live and breathe. Now, get on with it — and be brief!’

When Foxe had stood before this man the last time, Sir Samuel had affected an air of complete indifference. Now all was different. What he wanted was to send this meddlesome tradesman about his business; preferably with his tail between his legs. By the end of his opening speech, his face was suffused with red and purple from the effort of holding his temper in check. Foxe noted how the other man’s breathing was shallow, his fists clenched tight and his eyes narrowed with fury. He had expected some such display of temper, but even he was taken aback by the vehemence of Sir Samuel’s attack. Still, he had determined in advance nothing would shake his calmness. He therefore replied in a quiet voice, his words measured and his tone mild and reasonable. To his quiet satisfaction, he observed immediately how much this gentle manner seemed to inflame Sir Samuel even more.

I started to write fiction as a way of keeping my mind active in retirement. Throughout my life, I have 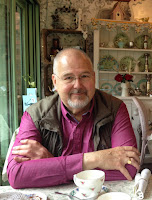 read and enjoyed hundreds of detective stories and mystery novels. One of my other loves is history, so it seemed natural to put the two together. Thus began two series of murder mystery books set in Norfolk, England.

All my books are set between 1760 and around 1800, a period of turmoil in Britain, with constant wars, revolutions in America and France and finally the titanic, 22-year struggle with Napoleon.

The Ashmole Foxe series takes place at the start of this time and is located in Norwich. Mr Foxe is a dandy, a bookseller and, unknown to most around him, the mayor’s immediate choice to deal with anything likely to upset the peace or economic security of the city.

The series featuring Dr Adam Bascom, a young gentleman physician caught up in the beginning of the Napoleonic wars, takes place in a variety of locations near the North Norfolk coast. Adam builds a successful medical practice, but his insatiable curiosity and knack for unravelling intrigue constantly involve him in mysteries large and small.

I have spent a good deal of my life travelling in Britain and overseas. Now I am more than content to write stories and run a blog devoted to the world of Georgian England, which you can find at http://www.penandpension.com. You can also follow me on Twitter as @penandpension.


The Fabric of Murder http://relinks.me/B00W3SDJW8


This Parody of Death http://relinks.me/B06XDNY81B


Bad Blood Will Out http://relinks.me/B079RCVQ4X


A Sickness in the Soul https://www.amazon.com/dp/B07WF3Y4VJ


The Code for Killing http://relinks.me/B01A2BY1LU


A Tincture of Secrets and Lies http://relinks.me/B075LM2TZP


Death of a Good Samaritan https://relinks.me/B07NLCGK2Y

This book sounds like it would be fun to read.

Did you come up with the title of the book before you started writing it?

No, Bernie. About half way through. Sometimes I have a provisional title, but I often change my mind if I think of something better.