This post is part of a virtual book tour organized by Goddess Fish Promotions. David C. Dawson will be awarding $10 Boroughs Bucks to a randomly drawn winner via rafflecopter during the tour. Click on the tour banner to see the other stops on the tour. 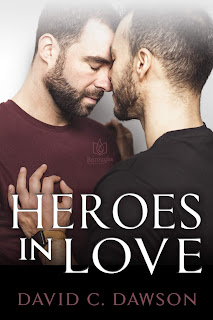 NOT EVERY HERO WEARS A UNIFORM

Can love last a lifetime? Billy Walsh and Daniel Richards never intended to be matchmakers. After all, they're only at the start of their own love story. When Billy uncovers a failed love affair, he learns it lasted more than fifty years until it fell apart. He and Daniel see their own fledgling relationship through the lens of the now estranged couple, and they vow to reunite the elderly lovers. But as they set about their task, the pressure of modern life threatens to tear them apart.

Billy was nearly an hour late when he finally rushed down Fulham Road and into the entrance of the Royal Marsden hospital where he ran into a black haired, brown-eyed vision of masculinity. Literally ran into. Publicly crashed into a stunning man wearing a white fitted t-shirt, a linen suit, tan loafers, and stood tall like a catwalk model. Too late Billy skidded to a halt, and into the arms of the handsome stranger.

“I’m so sorry,” Billy blurted out.

The vision of masculinity reached forward and grabbed his shoulders to stop him from falling.

“No problem.” The man looked directly at Billy and held on to his shoulders for a moment or so longer than was probably necessary.

Billy wanted to crawl away and hide in a corner. He had never considered himself a cool guy. The roles he played in soap operas as a sensitive-looking young man with an apologetic, hesitant manner were in truth no more than an extension of his own personality. He was uncomfortable in large social gatherings, and preferred his own company.

But this man with wavy black hair, deep brown eyes, and strong arms was someone he would dearly like to spend more time with. Billy struggled to find a witty phrase, a bright piece of banter to rescue the moment.

Sure? Billy shook his head at the crassness of his response. The man smiled, dropped his arms, and strode off.

About the Author: David C Dawson writes contemporary thrillers featuring gay men in love. He’s an award winning author, journalist and documentary maker. His debut novel won Bronze for Best Mystery and Suspense in the FAPA awards, and he has published two books since.

David lives in London with his boyfriend and two cats. In his spare time, he tours Europe and sings with the London Gay Men’s Chorus.

Thank you so much for posting!