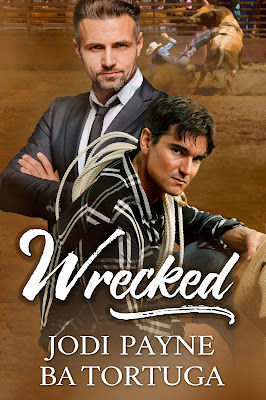 
The call comes when Beckett Adler least expects it. He’s made a new life for himself in Vermont and has a law practice of his own. After four years, he’s even stopped wearing his wedding ring. So when he finds out his husband, bull rider Skyler Paulson, has been badly injured at an event, he isn’t sure what he wants to do. He knows what’s right, though, so he heads down to Baltimore to bring his man home.

Sky knows his injuries are a career-ender, and he can’t believe Beck has come for him after all this time. He’s not a hundred percent sure what went wrong with their marriage, and he has no idea how to be anything but a bull rider. But he wants this second chance, so he grabs at it with both hands.

There’s a lot Sky has to learn, from how to walk again to how to settle down with the man he loves. Beck needs to learn to open up and how to be more trusting. For their marriage to work again, both men will have to find a way to meet in the middle. Because neither of them wants to be wrecked anymore.

Sky fucking refused to pussy out. He forced himself to walk whenever no one was watching. It was pure agony, dragging himself along behind his wheelchair, one step at a time.

He rolled his eyes as Kevin put a foot against the front of the chair. He hadn’t planned on getting caught.

“What the hell are you doing?”

“Going to the little cowboy’s room.” That was a fair answer, right?

Kevin rolled his eyes. “You know there’s no brakes on this thing, right? You want to walk? All right. Let’s go, cowboy. Let go of that death trap and hold on to me.”

“That’s fair enough. Thanks.” By the time he made it to the restroom, he was soaked through and breathing hard. Goddamn, it sucked to be old.

“So, you want the chair for the way back?” Kevin grinned, daring him.

“Fuck you, asshole.” He shut the door in Kevin’s face, huffing out laughter. He did his business, washed his face, thought about shaving, decided against it, and headed out.

The chair was waiting when he opened the door, and Kevin wasn’t playing. “Sit your ass down.”

He knew when he was stuck, so he sat. “I’m working to get better, buddy.”

“Good.” Kevin rolled him about two feet to a chair and sat in it, face serious. “Listen up. I’m your best friend and your worst enemy. You want to start walking? Great. We’ll do it. We will do it. You have a metal rod and pins in your femur and a brand, spanking new hip. You take one fall that you’re not prepared for, and that hip is toast. If your hip is toast, not even God is gonna let you walk again. Am I making myself crystal clear here?”

“I want to start walking.” He leaned forward. “My guy and me, we’ve been broke up for four years. Four. Now he’s in my life, and I’m fucking worthless. I got to get better, man. I have to.”

JODI PAYNE takes herself way too seriously and has been known to randomly break out in song. Her men are imperfect but genuine, stubborn but likable, often kinky, and frequently their own worst enemies. They are characters you can't help but fall in love with while they stumble along the path to their happily ever after. For those looking to get on her good side, Jodi's addictions include nonfat lattes, Malbec and tequila any way you pour it.


About BA Tortuga:
Texan to the bone and an unrepentant Daddy’s Girl, BA Tortuga spends her days with her basset hounds and her beloved wife, texting her sisters, and eating Mexican food. When she’s not doing that, she’s writing. She spends her days off watching rodeo, knitting and surfing Pinterest in the name of research. BA’s personal saviors include her wife, Julia Talbot, her best friends, and coffee. Lots of coffee. Really good coffee.

Having written everything from fist-fighting rednecks to hard-core cowboys to werewolves, BA does her damnedest to tell the stories of her heart, which was raised in Northeast Texas, but has heard the call of the high desert and lives in the Sandias. With books ranging from hard-hitting GLBT romance, to fiery menages, to the most traditional of love stories, BA refuses to be pigeon-holed by anyone but the voices in her head.