Thank you for having us on your blog today! We’re so excited to share the release of the first book in our Project Mars series, Future, Broken. For a quick idea about the series, check out this trailer

A little more about the book 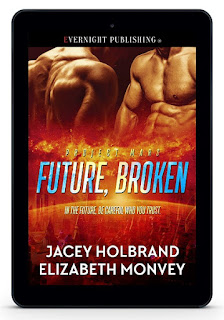 In the future, be careful who you trust.

Nathaniel Stockton and Grover Silas Ranger are faced with the ultimate test to their relationship when the Project Mars Lottery comes to town. Nate wins a chance to have his dreams come true: live and work on the red planet with his love. His husband Ranger doesn't see the point of going from one bad place to another. But an evil organization called Sector has a completely different idea for the couple.

Kidnapped, experimented on, impregnated, and sent to Mars, Nate realizes too late he trusted the wrong people.

Ranger fights to find a way to Nate. Will he make it to his love before their dreams and lives are irrevocably broken by distance, a pregnancy, and the corrupt agency? 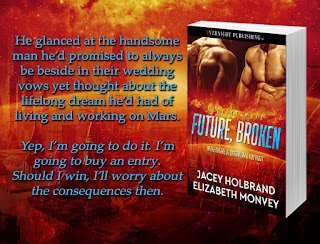 The phone rang, dragging Nate from his thoughts.
“I’m gonna put it on screen,” Ranger called out from the kitchen.
“Sure.”
The wall flashed to life, and a dark-haired man with dark eyes, appeared. The stranger reminded Nate of the doctor at the lottery exams—lab coat, stethoscope, well-groomed—but this man was older and seemed to have an edge to him.
“Hey,” Nate greeted. “What can I do for you?”
“Am I speaking with Nathaniel Curtis Stockton?”
“Yeah.” Nate took a swig of his drink.
“Wonderful.” The man smiled but the expression didn’t reach his eyes. “I am Doctor Rafael Trask. I am one of the lead scientists in a series of special clinical studies being performed. I understand you failed the medical section of the lottery exams?”
“Yeah.” The guy’s voice sounded cool … exact. Combined with the discord of his face, Nate sensed an air of danger surrounding the man. Creeped out, Nate was hesitant to say too much.
“Well, first off, let me say, we are not associated with the lottery. But should you participate in our studies you may have another chance at traveling to and settling on Mars. We also offer outstanding compensation. Despite whether you are or are not picked for travel, you will pretty much be set for life.”
Ranger strolled into the room and sat beside Nate, twirling the comm-wand between his fingers. “What are these studies?”
The man’s eyes narrowed. “Who are you?”
“His husband,” Ranger answered. “Whatever he’s to be involved in, wherever he’s going, I’ll be at his side. What’s all this about?”
Doctor Trask leaned back in his chair and steepled his fingers together. He looked down his nose at the camera on his comm device, appearing to contemplate what Ranger had said and giving Ranger a once-over. The doctor reminded Nate of a vulture.
“Okay,” Trask said. “Like I was about to mention to Mister Stockton, we are trying to find cures for people who did not pass the medical aspects of the lottery exams due to their diseases. We are also looking into the sterility epidemic and chromosomal changes in the female population.”
“Could you hold a moment?” Nate asked, grabbing the wand from Ranger and muting the call. He pointed the wand at the screen. “Do you think this is legit?”
“Yeah. It could be.”
“It might be the answer to our Mars problem.” Nate smiled, feeling a glimmer of warm hope spring up within him again.
“Perhaps. Should we see what’s what with it?”
Nate unmuted the call. “What if we say we’re interested?”
The doctor lifted a corner of his mouth. “I will digitize a package of information to you, and then we will be in touch with further instructions.”
“Well,” Ranger said, “count us interested.”
“Wonderful,” the doctor drawled.

AUTHOR INFO
JACEY HOLBRAND believes life and love comes in all forms and should be celebrated. She’s committed to her muse and writing so she can share her stories with readers. Hot days. Sexy nights. Come play in her world. Jacey loves to hear from readers!

ELIZABETH MONVEY is the pseudonym for a single mother from Los Angeles. She writes manlove stories, where the hero meets the man of his dreams because happily ever after is one of her favorite things.

Thank you so much for having us on here! We hope your readers enjoy reading this book as much as we enjoyed writing it. <3