The Viscount Meets His Match by Raven McAllan #historical #totallybound

The Viscount meets His Match

How to persuade the lady your interest is genuine? No easy task. Has the viscount met his match, or can he win and claim a wife?

What do you do when your father has no faith in you?

David, Suddards’ father assumes—wrongly—that David gambles deep and has had an affair with a married lady before she has given her husband an heir. Enraged, his father issues an ultimatum. Marry within three months or lose everything that is not entailed.

David refuses. If that’s what his father thinks of him, he can go to the devil. He will marry when he is ready and not before.

What a shock then, a year later, when the one woman he is interested in shows no interest in him!

It’s up to him to persuade her he’s the right husband for her, and when he does…sparks fly. Can these two strong-willed people ever learn how to compromise and find that in fact they are the perfect match?

David was honest—no well-brought-up young lady appealed to him. They never had, and he was wise to every trick any encroaching mama or deb might try to pull to ensure he had to make an offer.

Until now? He quashed that thought to be re-examined later. His tastes had always run to those females who were up to snuff and needed a man to dally with and satisfy them. That usually meant bored matrons—and only those with the requisite number of children of the correct sex, whose husbands accepted dalliance would be the next step. Plus, he didn’t approach opera dancers or the demimonde, whatever the grand dames of the ton chose to think. In fact, he ruminated as he glanced at the silent woman next to him, just lately he hadn’t had time to dally with anyone. Parts of him could well have seized up through lack of lubrication.

However, he had to acknowledge her lack of interest intrigued him.

Josephine halted just outside the ballroom and the tug on his arm made David stop mid-step. He looked at her inquiringly, and she grimaced before she must have remembered herself and curtsied. A gesture that was correct to the nth degree, he could imagine how much it had cost her.

“This is far enough, thank you. I, ah, appreciate your help,” she added stiffly. “Although I could have dealt with him myself, I do thank you for your intervention.” She didn’t add, ‘unnecessary as it was,’ but David could imagine her wishing she could.

“Of course you do,” he replied genially. “Why would you not? “

She flushed and he wished he had held his tongue, if not his actions. Because with regards to his intervention, he wasn’t so sure what his intentions were. Lord Reginald had a reputation for acting first and thinking later—and not always in a good way. The problem was how to divulge the information so she understood, took action and did not ignore him—or indeed overreact.

“Is it all men or only me you have an aversion to?” he asked as she began to walk away. He pitched his voice just loud enough for her to hear. She might ignore his question but there would be no chance of her not hearing it. “For if it is me, what have I ever done to you to deserve your contempt?”

“What?” She turned and took the three steps necessary to get within arm’s reach once more. Her blue eyes sparked in a way he had never noticed before and his body responded accordingly and tightened with interest. Again, she tempted him in a manner he would not have thought possible. How he’d like to shake her out of her present mood, but not in a manner that would be at all acceptable.

Again a notion to contemplate. Was he really debating dallying with this woman? His head said no, the rest of his body, the opposite. Why had he never really examined her luscious curves before? They appeared perfect in every way.

“Dare you not answer me?”

She frowned as if puzzled by his remark. David repeated himself. “How have I earned your contempt?”

“Sadly, as far as I can see, from my knowledge of your sex it encompasses all men, my lord. Although, with your reputation, I would put you near the top of my list.”

He grasped both her arms, drew her close and pressed a hard, swift kiss to her lips.

The jolt of immediate arousal was as unexpected as it was exciting. 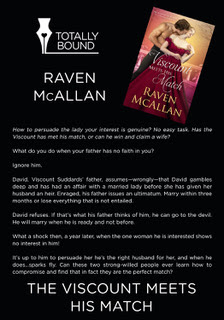 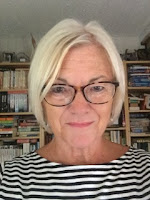 Raven is the author of both Regency and contemporary stories and also writes rom com as Katy Lilley.

She lives in the Trossachs, in Scotland on the edge of a forest, with her long suffering husband, who is used to rescuing the dinner from the Aga and passing her a glass of wine as she works.

Raven loves hearing from her readers and you can find her at www.ravenmcallan.com where all her social likes for Facebook and twitter are also found.
Posted by Wendi Zwaduk and Megan Slayer at 2:30 AM

Thank you for hosting me.