This post is part of a virtual book tour organized by Goddess Fish Promotions. The author will be giving away a $10 Amazon/BN GC via Rafflecopter. Click on the tour banner to see the other stops on the tour. 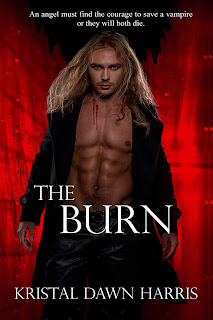 Leon, a fallen angel cursed to exist as a vampire, has waited for his mate for centuries when Shana shows up on his dance floor wreaking havoc with the other immortals in his club. Embittered by the deaths of her angelic parents, Shana denies Leon. She wants nothing to do with vampires, and walks away only to put both of their lives in danger. Compassion brings Shana back to Leon's side only to find him hovering close to death. Love grows until they are both encompassed by The Burn. Together they battle dark spirits and Lucifer himself, all the while falling deeper in love.

His fingers slid over her hips and pulled her flush against his own body. The music thumped in his ears blocking out everything else but her. In sync they found each other and moved together. Seduction by an angel felt perfect and right. His hand slid around the nape of her neck. Her hair was damp underneath with sweet sweat. She smelled delicious. One of her legs slid in between his as she tried to get closer. The hand he placed on her hip slid around to the exposed skin of her lower back. His fingers rubbed against the soft butter of her skin. Her hands slid up the back of his thighs, over his ass, and up his back to cup his shoulders. Her breasts pressed into his chest. Her nipples strained against her blouse. He closed his eyes on a tortuous groan.

The music slowed into a sultry, Latin rhythm. A soprano voice filled the club with a song about desire and the deep love shared between two souls. With their bodies harmonized with one another, they danced. Time seemed to pause for one brief moment. Leon held her tight against his chest and leaned over to accommodate her smaller frame. His hips cradled hers. She melted into his body as he led her in seductive control. An electrical current began to spark everywhere they touched. His body became a living conduit for her energy as it thrust against his own.

Kristal Dawn Harris is an American author, born in Middletown, Ohio, on August 16, 1970. She currently resides in Ohio with her husband. Kristal has been married for 27 years and has two children. She graduated from Carlisle High School in 1988, then furthered her education at Miami University. She has a business degree in Accounting Technology. Kristal spent twenty years working as an Office Coordinator in the hospital until she released her debut novel, “The Rings of Faolan-Emeralds,” through The Wild Rose Press.

In 1999, Kristal suffered a debilitating disease called “Guillain-Barre Syndrome.” This rare disease damaged the nerves in her body requiring the use of drop-foot braces in order to walk. Kristal considers herself a survivor and encourages anyone with a disability to follow their dreams.

Kristal has one more book contracted with The Wild Rose Press which will release in 2019. She is considered a hybrid author since she published “Hand-Carved Wolf” on her own. Kristal is an avid reader who enjoys romance from all genres, but paranormal is her favorite.

I appreciate you taking the time to give us a great book description and giveaway as well. Thank you so much!

How many hours a week do you spend writing on average?

I try to spend at least two hours, sometimes more, writing or editing daily. There are days when life gets in the way or I just need a break, and that's okay. Thanks for asking, Bernie.